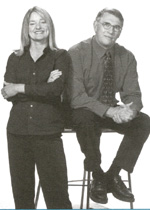 
"The VSE is one of the most profitable enterprises on the face of the earth--for those who own it." -- David Cruise, 1987

Toronto Star columnists David Cruise and Alison Griffiths have co-written numerous non-fiction books and one novel called simply Vancouver. That historical novel is a 750-page Micheneresque saga that was arranged by their Toronto agent Bruce Westwood in conjunction with a New York editor for HarperCollins, Larry Ashmead, who had been smitten by Vancouver upon his arrival by train through the Rocky Mountains. Having lived in Vancouver and Victoria during the outset of their book writing careers, the couple was hired for the project. The duo had been criticized for sensationalizing history in their non-fiction, so the chance to try making fiction seemed appropriate. Vancouver: A Novel consists of twelve linked stories in sequential time periods from the ice age to present day, including one non-fictional character, Warburton Pike, the gentleman immigrant, author and would-be entrepreneur. The saga culminates with a part-Aboriginal character Ellie Nesbitt in Stanley Park, sensing her ancestral past. The ambitious project doesn't percolate as fiction: it is a concept masquerading as a novel. Coincidentally Linda Wikene Johnson released a similar historical novel called Vancouver! but her effort was overshadowed by the publicity push for the Cruise/Griffiths experiment.

One of the couple's best books was their first, an investigation of the Vancouver Stock Exchange. They reported the odds of losing money on the VSE during a 12-year period in the 1960s and 1970s had been 84%. They accused the VSE of inadequent enforcement of adequate regulations, profiling Murray Pezim, Morris Black, Egil Lorntzsen, Norman Keevil, Bruce McDonald, John McGraw, Peter Brown and the VSE's legendary first promoter Alvo von Alvensleben, rumoured to be a German spy. Cruise and Griffiths have won numerous writing awards, including the Atkinson Fellowship in Public Policy. Both left their previous spouses in order to live and write as a couple. Their bestselling exposé about the business of hockey, Net Worth, was vilified by the NHL and former agent Alan Eagleson, but it provided new information that encouraged the NHL hockey players' strike of March, 1992 and helped retired players sue the league about mismanagement of their pension fund since 1957. It became a CBC television movie, co-scripted by Cruise and Griffiths, that received four Gemini awards. After writing a financial advice column for seven years in the Toronto Star, they released The Portfolio Doctor. Cruise and Griffiths (shown at right) live near Milton, Ontario.

Review of the author's work by BC Studies:
Vancouver: A Novel

Fleecing the Lamb: Inside the Vancouver Stock Exchange (Douglas & McIntyre, 1987)

The Great Adventure and On South Mountain, and

Lords of the Line: The Men Who Built the CPR (Penguin)

Net Worth: Exploding the Myths of Pro Hockey (Penguin, 1991)

The Great Adventure: How the Mounties Conquered the West (Penguin 1997)

The Portfolio Doctor: Your Prescription for Investment Health (Penguin 2004)

Articles: 4 Articles for this author
The Great Adventure: How the Mounties Conquered the West
Info


Former Victoria husband and wife team Alison Griffiths and David Cruise, now living in Toronto, have written a new study of the RCMP, The Great Adventure: How the Mounties Conquered the West.


Formerly based in Vancouver and Victoria, David Cruise and Alison Griffiths has gone a long way since their first title in 1987, Fleecing the Lambs, which provided lots of reasons NOT to invest in the VSE. Having just banged out a 750-page novel entitled simply Vancouver (HarperCollins), the writing tag team has cobbled together seven years worth of how-to investment advice from their financial column for The Portfolio Doctor (Penguin $28), available in the spring. 0143015435


The odds of losing on the Vancouver Stock Exchange during a twelve year period of the 1960's and 1970's were 84%. Five of every six investments were going sour.

"The evidence we've found since then," says David Cruise, co-author with Alison Griffiths of Fleecing The Lamb (D&M $24.95), "indicates the overall situation at the VSE hasn't improved."

Cruise and Griffiths, a husband and wife team, studied the history, the leading personalities and the profitability of .the VSE for a year and a half.

"The VSE is one of the most profitable enterprises on the face of the earth," says Cruise, "for those who own it." The VSE is owned and managed by 48 brokerage firms. The authors claim a comparable situation would be if the CTV network was allowed to own and operate the CRTC.

Because documentation of VSE affairs is almost non-existent for periods prior to the mid-1970's, and because files are far from complete even in the 1980's, it has been extremely difficult for either police or journalists to conclusively examine VSE affairs. Cruise and Griffiths were fortunate to get their hands on a comprehensive but hushed-up study, Public Financing of Junior Resource Securities in British Columbia, compiled by Michael Brown of Brown, Farris &Jefferson Ltd., covering a period from 1965 to 1978.

"The most stunning statistic these guys found," says Cruise, "was that of $1.2 billion raised through primary and secondary financing, only 51.3% made its way to the companies that it was raised for." Brokers took 27%, promoters took 13.8% and property vendors took 7.9%.

Some of the most profitable brokerage firms in the country operate in Vancouver. In 1980, says Cruise, Peter Brown's Canirim Investments had a net profit of $30 million. By comparison, Midland-Dougherty, a much larger national firm with head offices in Toronto, had a national profit of $16 million.

"I hope people will find the book critical in the best sense of the word," says Cruise, who grew up playing the stock market from Victoria, "We're not taking a close-it-down attitude. We simply feel that too much of the profit is going to the people who own the exchange.

"The VSE could be a lot more efficient. It could be an enormous engine of economic activity. But as it is too many of the ideas or companies are floated because they're sexy, because they'll sell well."

The authors claim excellent regulations exist to control the Exchange and its often flamboyant figures -such as arms dealer Adnan Khashoggi -but there is inadequate enforcement. The Superintendent of Brokers, the government agency in charge of policing the VSE, is underpaid and undermanned.

Fleecing the Lamb and Jimmy: An Autobiography will be the two most talked about B.C. books on business. Business Etiquette Today (Self-Counsel $7.95 tent.) by Jacqueline Dunckel could be the most useful. The new book covers everything from how to hold your soup spoon to sexual conduct around a conference table.


ALAN EAGLESON WANTS TO Penalize Victoria couple Alison Griffiths and David Cruise for writing Net Worth (Penguin $27.95), an expose of the bucks behind the pucks. Eagleson, former head of the NHL Players' Association, threatened to sue Penguin Books because Griffiths and Cruise allege that 'the Eagle' has not always acted in the players' best interests. "Somehow Eagleson got hold of a confidential copy of our uncorrected galleys," says Cruise, who cites Eagleson's "renowned vengeance" in the text. Net Worth clearly reveals that although the NHL has been very profitable for most of its owners, many of the big names in the game--Bobby Hull, Gordie Howe, Frank Mahovlich--were
underpaid and they retired with "wretched" pensions. "Hockey players are still the worst paid of all pro athletes,"; says Cruise.

After 19 years in the game, Gordie Howe had only worked himself up to $27,500 a year including bonuses. Detroit Red Wings owner Jack Adams would offer Howe a completed contract each year, with only the salary left blank. "Just fill in what you're worth, Gord," he said. "Howe dutifully added a mere $1,000 annual raise," Cruise and Griffiths report. "Adams, never deigning to look at the contract, would utter some variation of You're a good fella, Gord, clap him on the back and, if he were in a particularly expansive mood, take him out to lunch." Net Worth further depicts Gordie Howe as "the most shabbily treated superstar in sport" who even now is treated by the NHL as "little better than a water boy" when the league requires his services as an ambassador. Following his 26 years in the NHL, Gordie Howe now receives a pension of less than $13,000 annually. In Net Worth, the authors reveal that it was Toronto Maple Leaf defenceman Bobby Baun who finally made Howe realize that his naive humility was actually having the effect of holding down salaries throughout the league for more than a decade.

Net Worth also claims that Wayne Gretzky ('The Great One') is partly to blame for low salaries and lousy pensions. "Gretzky has been well aware of pension issues and the failings of the NHLPA since 1985," say the authors, "yet he's chosen to avoid the controversy. Gretzky's image may be untarnished for the fans and corporations, but a lot of players won't forget his reluctance to get involved when he could have made a difference single-handedly." In the1950s several top players such as Ted Lindsay and Doug Harvey tried to form a players' association. They specifically wanted to find out how their pension plan fund was operated and how the funds were invested. Their attempt was ruthlessly smashed by the NHL owners, led by Toronto's Conn Smythe. In 1966, Alan Eagleson succeeded in forming the first players' association for two reasons: He was Bobby Orr's agent ("From the beginning, Orr was a walking advertisement for Alan Eagleson"). And the owners were afraid when they heard the Teamsters wanted to unionize the league. "I don't like unions," Conn Smythe said, "but I'm glad it's Eagleson at the head of the Players' Association rather than somebody else." In 1980 Bobby Orr parted bitterly with Eagleson, severing all business ties with the man he used to phone every morning before breakfast. Cruise predicts that the players' current best hope is Eric Lindros, the 18year-old superstar who is refusing to report to Quebec where he's been drafted. "He may be the player that breaks the owners' control of hockey," Cruise told BookWorld. 0-670-83117-4