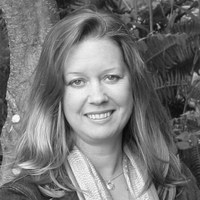 
Cynthia Heinrichs was born in Winnipeg, Manitoba but grew up in Vancouver, BC, where she has lived most of her life. She majored in psychology at UBC where she earned a Bachelor's degree and discovered a love of history.

The storyline for her picture book Mermaids reads: "For hundreds of years women on Cheju Island in South Korea have supported their families by diving to the ocean floor to collect seaweed and the various edible creatures found there. It is Jae Hyun's dream to be a haenyo, a mermaid, like her mother and grandmother, but her mother forbids it. The life of a haenyo is a dangerous one. She wants a better life, a safer life, for her daughter. Then tragedy strikes and Jae Hyun's courage is tested, as is her dream. She must prove to herself and to her mother that she is worthy of the choice she has made."

The promo for Under the Mound reads: "It is recorded in the Orkneyinga Saga that in 1153 Earl Harald and his men were caught in a snowstorm in Orkney. They took shelter in the mound of Orkahaugr and there two of them went mad. Nearly nine hundred years have passed with no explanation for what happened to those men under the mound. Until now. During the Yule season of 1153 Malcolm mac Alasdair is sent to serve the half-Scots, half-Viking Earl of Orkney, who is on a quest to regain his earldom from a treacherous cousin. Malcolm is an artistic boy with no knack for warfare. He is certain that he will only hinder the young earl and get himself killed in the bargain. His father's reason for sending him on the dangerous venture does nothing to allay his fears: in a vision he has seen Malcolm go to Orkney with Earl Harald. But the vision is incomplete. He has not seen Malcolm return."