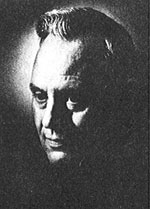 
Born in New Ulm, Germany in 1909, Rudolf Bernhardt Dangelmaier produced a testament to the humble genius of B.C.'s folk architects, Pioneer Buildings of British Columbia (Harbour, 1989). It features the artist's 158 illustrations of bygone buildings, mainly from the Fraser Valley. The son of a professional church decorator, he was trained as a designer and artist in his native Germany, and began his career in Europe in 1918. After immigrating to Canada in 1929, he began documenting pioneer buildings in Saskatchewan while working as a designer, interior decorator and painter. He arrived in B.C. in 1937. Canada Council grants allowed him to devote himself fulltime to drawing and painting from 1970 to 1972. He died in 1994. The Fort Langley Heritage Foundation purchased all of the original pictures in Pioneer Buildings of British Columbia. They have been displayed around the province and at the Fort Langley museum on a rotating basis.