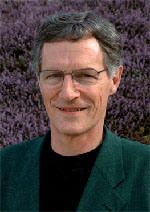 PLACE OF BIRTH: Victoria, BC

EMPLOYMENT OTHER THAN WRITING: Professor of English, UBC

The Book of the Cosmos: Imagining the Universe from Heraclitus to Hawking (Cambridge, Massachusetts: Perseus Publishing, 2000). Editor.

Upon completing a BA at the University of Victoria (1972), Dennis Richard Danielson studied Intellectual History at Sussex (MA, 1973) and English Literature at Oxford and Stanford (PhD, 1979). After beginning his career at the University of Ottawa he took up a tenured position at UBC in 1986. He is actively engaged in research linking the humanities and the sciences, and his work on the history of cosmology has recently received attention in both scientific and popular media.