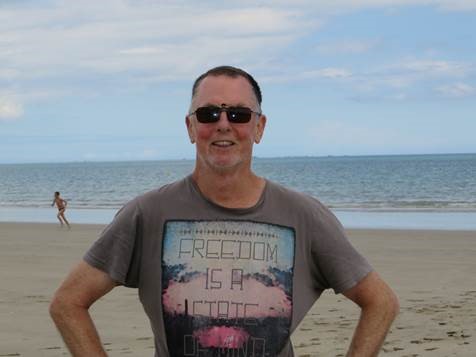 
Born in New Westminster on September, 11, 1954, David MacKinnon is a lawyer by training, member of both the British Columbia and Quebec law societies. He has five university degrees, including two law degrees and two degrees from UniversitÃ© de Paris IV-Sorbonne. He studied history, law, languages and philosophy at the universities of British Columbia, Louvain (Belgium), Sorbonne (Paris), Laval (QuÃ©bec) and Ottawa. He has worked in oilfields, factories and warehouses, morgues and operating rooms, lumberyards, shipyards, construction sites and in the courtroom as a trial lawyer. For the better part of 25 years, he lived and worked in France and Quebec. He has written eight novels, not all of them published. In 2017 he was operating a legal translation company, Rosetta Scribes Corporation.

MacKinnon's novel, The Eel (Guernica Editions 2016), is based on the life and times of Cendrars. The idea for the book arose from his friendship with Miriam Cendrars, Cendrars' daughter, whom MacKinnon met through his Paris publisher, Editions Denoel.

The Eels tells the tale of a writer, Jack Fingon, who devises a plan to fulfil the testamentary wish of French vagabond poet Blaise Cendrars to be buried in the Sargasso Sea where "life first burst from the depths of the ocean floor towards the sun".

MacKinnon contends it's that somebody like Cendrars, "who evokes Lawrence of Arabia, Marshall McLuhan and Jack Kerouac, and was such an influence in
Montparnasse between the wars", remains a figure virtually unknown to English readers.

"I think that it is in part due to his incredible, but indefinable range, and his ongoing experiments with writing. That's why I think Cendrars Speaks brings him alive," he writes.

"Cendrars was a complete character, but also someone who understood media - and his interviews in Cendrars Speaks are pure performance art/impro theatre."

MacKinnon claims he is a direct patrilineal descendant of Findamus (843 AD), grandson of Kenneth McAlpine, first King of the Scots and Picts, as well as a direct matrilinear descendant of Niall NoÃ­gÃ­allach of the Nine Hostages.

The MacKinnons arrived in Nova Scotia on the Hector in 1791, evicted from their lands in the aftermath of a failed attempt to seize the throne of England and reinstate Charles Stuart as monarch. The clan chief, John MacKinnon, personally assisted Bonnie Prince Charlie in his escape to France, and was imprisoned in the Tower of London for a year as a result.

The clan motto is "Audentas Fortuna Juvat"; or "Fortune to the Daring";.

MacKinnon grew up within a prominent B.C. legal family. Educated by nuns and the Christian Brothers of Ireland, he left home at 17, moved to Vancouver, and departed for Europe at age 19. He read history and played rugby in Leuven Belgium and at Paris IV-Sorbonne; then worked in the Alberta oilfields during the boom of the late 1970s, transporting oil rigs on a picker truck and working on the pipelines. For ten years after that, he qualified in the Civil and Common law and practiced as a trial lawyer. In 1989, moved to China in the aftermath of the Tiananmen Square massacre "to ply his trade in those tumultuous, end of empire days" as an immigration and business consultant under a Chinese name.

MacKinnon claims he was classified as persona non grata in the Seychelles for writing on corruption and life on MahÃ© island for ordinary Seychellois. He trekked to Chartres several times from Paris, and in 2002, walked the thousand-year-old camino frances trail from the Pyrenees across northern Spain to Santiago de la Compostella. He then "drifted to the extreme Southern Highlands of Madagascar, a region which to this day is peopled exclusively by Betsileo outlaws and ex-slaves, and whose idea of enjoyment is a four day funeral or performing ritual poisonings of adulterers and zebu thieves."

In 2014, MacKinnon co-founded the Long March to Rome, a march of indigenous leaders and hereditary chiefs on the Vatican to force the repeal of three fifteenth century Papal Bulls that provided the legal and moral underpinnings for the Age of Discovery: http://longmarchtorome.com/