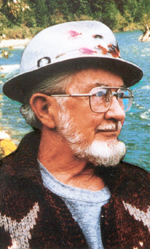 
Born in New Westminster in 1924, Gordon Davies died in 2009. He was introduced to angling in the tiny Salmon River at Fort Langley when he was eight, and he later explored, fished, photographed and fell into virtually every major river in B.C. His articles on angling were published in Canada, the U.S. and Mexico. The Living Rivers of British Columbia (Ronsdale, 1994) portrays 19 of B.C.'s greatest rivers and distills a lifetime of fishing lore. It was followed by The Living Rivers of British Columbia & Yukon, Volume 2 (Ronsdale, 1996) that profiled another 21 rivers. He also wrote Fishing B.C. Rivers: Big Fish and Accessible Waterways (Hancock House).


Gordon Davies, widely known as a contributor to fishing magazines, is accompanied on all his fishing expeditions by his childhood sweetheart, Pauline, after 50 years of marriage. In The Living Rivers, Vol. 2 (Ronsdale $14.95), Davies guides fisher and non fisher through his reminiscences that include rivers such as the Swift, Stamp, Harrison, Tetsa, Oyster, Capilano, Chehalis, Pine, Nanaimo, Alouette, Brown, Murray, Puntledge, Cheakamus, Skagit, Yukon, Salmon, Bonaparte, Elk, Toad and Cowichan.


Outdoor adventurer and travel writer, photographer and author of the Living Rivers of BC books, Gordon Davies died November 25 in White Rock, BC, at the age of 85, after a three-year struggle with Alzheimer's Disease.

Davies wrote travel and outdoor stories for magazines and newspapers in Canada, the US, and Mexico, from the 1960s to the 21st century.

A native of New Westminster, he served in the Canadian Army overseas in World War II, where his artistic and musical talents put him in the Army Show, keeping up the morale of our troops during many a bombing raid in England. After he came home and married his childhood sweetheart, Pauline MacKenzie, he worked in the printing business in New Westminster, Kelowna and White Rock. He also worked in the Vancouver newspaper industry before taking up his second career as a writer and photographer.

His love of nature was evident in his intimate writing style, in the many moods of his photographs, and in his devotion to causes such as the Semiahmoo Fish and Game Club's fish hatchery near White Rock as well as, on a larger scale, the World Wildlife Federation.

Gordon and Pauline Davies, most often accompanied by their youngest son, Rob, traveled from Canada to Mexico's Baja Peninsula every winter for more than 20 years, taking time to explore rivers in the states of Washington, Oregon and California along the way. Many of these side trips led to stories in American publications, just as the trio's travels in Mexico inspired articles for the Baja Times. His many readers drew inspiration from Davies's work, and from his rare insight into these regions.

Over the years, friends accused him of contributing to the influx of tourism in Mexico, especially to the transformation of Baja's San Felipe from a sleepy fishing village to a destination hot-spot. Davies would reply, "You're right, and now there aren't enough fish to go around."

Gordon Davies was a man who cared about the environment long before it became a popular agenda for politicians and the general public. When their long-distance travel days were over, he and Pauline settled by the sea in Fanny Bay on Vancouver Island. These words from 'Voices United' describe his relationship with the world as he saw it. "I've got peace like a river, I've got love like an ocean, I've got peace like a river in my soul."