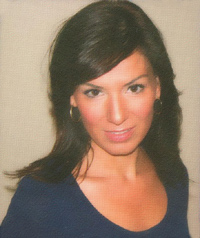 For the 800,000 Aboriginal people in Canada, 500,000 of whom are living off-reserve, the First Nations Drum has been a vital link. During its 14 years as a national newspaper, First Nations Drum has run its share of puff pieces on Aboriginal role models such as Buffy Sainte-Marie, actor Adam Beach, hockey player Jordin Tootoo, artists Bill Reid and Robert Davidson, and guitarist-songwriter Robbie Robertson. But it's not all fluff. A 2000 cover story featured the missing women of Downtown Eastside-many of whom are Aboriginal-as a follow-up to the Drum's 1997 coverage. Another cover design featured Gordon Campbell with a Hitler moustache and Gestapo outfit, clutching Mein Referendum, in reference to the controversial public vote in response to Aboriginal land claims in B.C.


In Natasha Davies's ground-breaking first novel webc@m girl, Brandon Chase, a privileged 30-something playboy, is infatuated with Vancouver's hottest webcam girl, Shelby Munro-but the path of virtual love doesn't run smooth.
Shelby wants out of the on-line adult sex industry. After she turns off the webcams in her apartment, Brandon sees the newly virtuous Shelby-the real Shelby-in a trendy bar and introduces himself, hinting she might get some work with his company.

When Shelby's former on-line manager Craig discovers Shelby has not only left him for a job at Brandon's security software company, but is also having an affair with her boss, Craig descends deeper into a world of drugs and extortion, plotting to humiliate and ruin Shelby.

If Doug Coupland had worked in the Vancouver on-line sex industry, he might have written this all-too-believable novel of manners. Natasha Davies has a background in business journalism, and has covered the Web for magazines, TV, new media and newspapers including Internet News and The Globe & Mail.