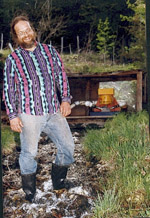 
Generating electricity from water power is the largest source of renewable energy in the world--but you don't need earth movers and cement and an enormous dam to make hydroelectricity.

For any neophyte who wants to make their own hydroelectricity from water power, Scott Davis first wrote a layman's guide called Microhydro: Clean Power from Water (New Society 2004 $29.95).

As co-founder of the non-profit advocacy group FORE! (Friends of Renewable Energy! B.C.), Davis explained all the technical stuff. The process of changing DC voltage into AC, for instance, is called inverting.

"One of the reasons that microhydro isn't everywhere," Davis said, "is that inverters were only perfected in the late 1980s. They were available earlier, but they were unreliable and expensive. Since they were expensive, they were often on the small side for the jobs asked of them. As a result, they were routinely overloaded, and their reliability suffered."

Recent improvements in technology have rendered microhydro installations much more practical. Davis has subsequently gathered and edited dozens of firsthand stories of energy independence from the pages of Home Power magazine for Serious Microhydro: Water Power Solutions from the Experts (New Society $29.95).

Case studies of harnessing the power of running water are designed to encourage and instruct individuals to meet the needs of particular sites ranging from systems for household needs to small neighborhoods.

Since he dropped out of graduate school in 1977 to work on a village-scale microhydro project, Scott Davis has owned, operated, repaired, sold "and generally fooled around with microhydro technology" ever since.