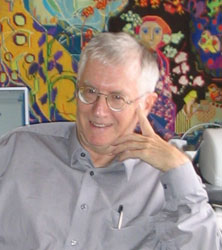 
Born on July 18, 1937, Paul Delany is a literary biographer who has published George Gissing: A Life and a fascinating study of the poet who was once touted as the most attractive man in England, Fatal Glamour: The Life of Rupert Brooke. The latter is a follow-up to his overview of an era, The Neo-Pagans: Rupert Brooke And The Ordeal Of Youth (The Free Love Press, 1987).

According to publicity materials: "Rupert Brooke (b. 1887) died on April 23, 1915, two days before the start of the Battle of Gallipoli, and three weeks after his poem "The Soldier" was read from the pulpit of St Paul's Cathedral on Easter Sunday. Thus began the myth of a man whose poetry crystallizes the sentiments that drove so many to enlist and assured those who remained in England that their beloved sons had been absolved of their sins and made perfect by going to war. In Fatal Glamour, Paul Delany details the person behind the myth to show that Brooke was a conflicted, but magnetic figure. Strikingly beautiful and able to fascinate almost everyone who saw him - from Winston Churchill to Henry James - Brooke was sexually ambivalent and emotionally erratic. He had a series of turbulent affairs with women, but also a hidden gay life. He was attracted by the Fabian Society's socialist idealism and Neo-Pagan innocence, but could be by turns nasty, misogynistic, and anti-Semitic. Brooke's emotional troubles were acutely personal and also acutely typical of Edwardian young men formed by the public school system. Delany finds a thread of consistency in the character of someone who was so well able to move others, but so unable to know or to accept himself."

Literature, Money and the Market from Trollope to Amis. London and New York, Palgrave, 2002. Pp. 235.

[Editor] Vancouver: Representing the Postmodern City. Collection of essays by various authors, with an introduction by the editor. Vancouver: Arsenal Pulp Press, 1994. Pp. 296.