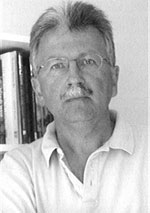 Born in Burnaby on June 7, 1957, freelance photographer Don Denton has worked for newspapers as a photographer and picture editor throughout western Canada as well as for the British wire service Reuters based in Brussels, Belgium. Publisher of a photo magazine called Deadline, he began photographing Canadian writers in the mid-1990s and has taught photography at Mount Royal College in Calgary and the Western Academy of Photography in Victoria.