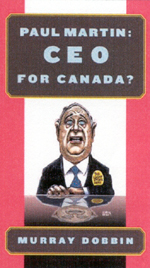 
Murray Dobbin has been the Linda McQuaig of the West Coast in the late 1990s and beginning of the 21st century. He effectively attacked Canadian neo-conservatism and its MAI aims in The Myth of the Good Corporate Citizen and also wrote Preston Manning and the Reform Party. A journalist, radio broadcaster and documentary filmmaker, he has been the B.C. spokesperson for the National Executive of the Council of Canadians and has served on the board of the Canadian Center for Policy Alternatives (CCPA)-a think tank that attempts to offset The Fraser Institute. He has prepared several programs for CBC Radio's Ideas series, including an examination of the New Right agenda in New Zealand, and appeared regularly on a political panelist for Peter Gzowski's Morningside program. With an Aislin cartoon jacket featuring Paul Martin wearing a button saying The Loony Stops Here, Dobbin's critique of incoming Liberal Prime Minister Paul Martin traced Martin's twin careers in business and politics to conclude his policies would be closer to those of Conservative Prime Minister Brian Mulroney than traditional views of the federal Liberal Party. Born on April 4, 1945 in Prince Albert, Saskatchewan, Murray Dobbin came to B.C. in 1995.