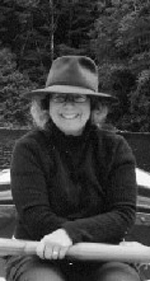 
Born in the US, Sara Dowse left at age 19 for Australia, where she lived for 40 years before coming to B.C. at the end of 1998. In Australia she was the inaugural head of the Office of Women's Affairs and was involved in developing and implementing many of the feminist reforms of the 1970s and 1980s. In the late 1970s, she left the public service and began working as a freelance writer and editor. Since coming to B.C., she's also worked as a graphic designer.

ARRIVAL IN CANADA: December 1998, from Australia