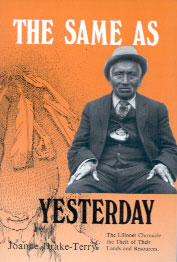 
A Vancouverite trained in history at SFU, Joanne Drake-Terry was hired by the Lillooet Tribal Council in 1982 to research the history of the Stl'atl'imx people. The Council published her history of Lillooet territory during the 19th and 20th centuries as The Same as Yesterday: The Lillooet Chronicle the Theft of Their Lands and Resources (Lillooet Tribal Council, 1989). This account emphasizes the process by which control of traditional Lillooet lands was confiscated by legal and administrative means, resulting in the Declaration of the Lillooet Tribe in 1911 to demand attention to grievances from the federal government. "The author,"; according to historian Ken Coates, "is too angry for the good of the work."; This criticism is debatable. The Same as Yesterday serves as a rallying point for activism as much as it serves as a battering ram to open the gates of justice. Drake-Terry's husband Saul Terry, born in 1942, has been the longest-serving president of the Union of BC Indian Chiefs. First elected in 1983, he served for 15 years until he was replaced by Stewart Phillip of the Penticton Band. Influenced as a young man by UBCIC founders Philip Paul and George Manuel, Saul Terry was first elected as chief of the Xwisten Community (Bridge River Band) in 1973.

Review of the author's work by BC Studies:
The Same as Yesterday: The Lillooet Chronicle the Theft of their Lands and Resources

Drake-Terry, Joanne. The Same as Yesterday: The Lillooet Chronicle the Theft of Their Lands and Resources (Lillooet Tribal Council, 1989).