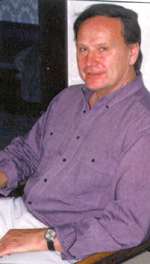 
"I would believe only in a God who could dance." -- Friedrich Nietzsche

Born on February 17, 1930 in Mollln, Germany, Driediger's family came to wouthwestern Manitoba later that year. He received a B.A. in Political Science from Queen's University and began a career in journalism in 1951 as Ab Douglas. He became Parliamentary Bureau Chief and co-anchor of the National News with Peter Jennings for CTV. In 1967 he moved to CBC to produce documentaries and work as a foreign correspondence in Mosdow. In 1980 he took a teaching position at University of Regina's School of Journalism. He moved to Kelowna in 1997. He was raised with a traditional Mennonite upbringing. No Dancing God (self-published, Kelowna: Rutgers Publications, 1998) is the story of his integration into the mainstream of Canadian society. The stories, according to Driediger, "hover in the twilight zone betwen reality and fiction." He also wrote On Foreign Assignment: The Inside Story of Journalism's Elite Corps. (Detselig, 1993).