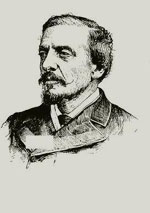 
Frederick Temple Hamilton Blackwood, better known as the Earl of Dufferin, was influential in the evolution of British Columbia as a political entity. After he was appointed Governor-General of Canada in 1872, he visited British Columbia with Lady Dufferin in 1876 and allayed fears that Confederation might not be in the province's best interests. The couple hosted a ball for 500 people and Lady Dufferin, an amateur artist, continued her energetic promotion of the arts. Some of her watercolors of British Columbia are housed at Library and Archives Canada in Ottawa. As a role model for women in the late 1800s, she epitomized progressive civility. (Similarly, Princess Louise, the fourth daughter of Queen Victoria, visited Victoria in the fall of 1882, accompanied by her husband, the Marquis of Lorne, Governor-General of Canada, living at Government House (Cary Castle) for two-and-a-half months. Her watercolours of Victoria are at the National Gallery of Canada.)

The Earl of Dufferin was born in Florence, Italy on June 24, 1826. Educated at Eton and Oxford, he left university without attaining his degree, taking his father's title in 1841. He served in the British diplomatic service in Vienna, Iceland, Syria and India prior to coming to Canada. He remained as Governor- General until October of 1878, having been elected as president of the Royal Geographical Society in May of that year. He received an honorary doctorate from Harvard and helped create the international park adjacent to Niagara Falls. He was British ambassador in St. Petersburg (1879) and Constantinople (1881) prior to his role as a mediator between Egypt and England in 1883. He became viceroy of India in 1884. Noted for his abilities as an orator, he also wrote Narrative of a Journey from Oxford to Skibereen during the Year of the Irish Famine (London, 1848), Letters from High Latitudes (London, 1860), Contributions to an Inquiry into the State of Ireland (1866), Irish Emigration and the Tenure of Land in Ireland (1867) and Mr. Mill's Plan for the Pacification of Ireland Examined (1868). Edited by Henry Milton, his oratory was collected in Speeches and Addresses (1882). William Leggo wrote A History of the Administration of the Earl of Dufferin in Canada (Montreal, 1878).