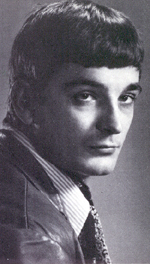 
Dyba published three works of darkly comic fiction with defunct November House between 1973 and 1983, Sister Roxy (1973), Lucifer and Lucinda and The Long and Glorious Weekend of Raymond and Bingo Oblongh (1983). There were few publishing houses in B.C. in the 1970s that published novels, so his novels are rarities for their source. Dyba was born in Nordegg, Alberta in 1945, but grew up in Calgary after age eight and moved to Toronto in the 1980s. Dedicated to Bette Davis, Sister Roxy concerns his preoccupation with the movies and his fanciful recollections of Nordegg. The Long and Glorious Weekend (etc.) is an absurdist romp introducing 340-lb. Raymond, his 17-year-old dog Bingo, Mom Oblongh, Ike Big Balls, Princess Winter and her Butch Brigade, Fast Foster, Shades Louise, Biff Adonis, Mr. Alice and Alberta Rose. It was promoted as a flamboyant 'carnival of decadent debauchery' but the sexual content is minimal compared to its attempts at comedy. Dyba worked for the Bristol Old Vic theatre and had a play called The Sun Runner produced in Toronto. He attended university in Vancouver.