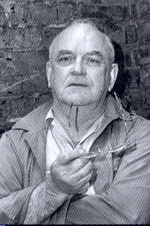 
Fred Edge left pre-med studies at University of Ottawa to join the Ottawa Citizen as cub reporter at age 17 in 1944, then joined the the Vancouver Province in 1946. He left in 1949 to work on several major eastern Canadian dailies and for British United Press. He freelanced more than 200 magazine articles in Toronto and from Europe as a Paris-based correspondent for New Liberty Magazine. Edge also wrote teleplays for CBC, NBC and ITV (U-K) and as the editor in Toronto/Hollywood for "Cannonball," as well as the writer for several other networked half-hour series. He contributes essays ("when something sufficiently fires me up!") to the Victoria Colonist Op-Ed page. He has also worked as a B.C. logger, a sectionman for the CNR and literally 'rode shotgun' on gold bullion shipments from northern Ontario to Ottawa. His primary literary influence is Jack London. He is widowed with three sons and one daughter.

The Iron Rose (1992) is Edge's biography of Charlotte Whitehead Ross, Quebec's and Manitoba's first female physician. At age 27, with three children, she left Montreal and went to Pennsylvania to the Woman's Medical College because no Canadian medical college would accept women as students. She eventually received her medical degree in 1875, practiced in Quebec, then moved west to practice in the railway town of Whitemouth, Manitoba. She did so without a license. She constantly risked prosecution because she refused to leave her husband, their eight children and her patients in order to spend time at a Canadian medical college to be sanctioned by the all-male admissions board of the Manitoba College of Physicians and Surgeons. In 1887 she appealed to the Manitoba Legislature to license her but her appeal was denied. She practiced until 1912, almost 25 years after her appeal for a license was rejected. She died in Winnipeg in 1916, at age 73. She was never prosecuted. In 1993, Manitoba Liberal leader Sharon Carstairs successfully proposed a resolution to grant Charlotte Ross a medical license posthumously. Fred Edge's five-province-wide research into the life of Charlotte Ross began after his wife Christina found a brief mention of the pioneering female doctor in a local history.

PLACE OF BIRTH: Ottawa, ON

Borrowed Time: Living with Cancer with Someone You Love, Oolichan Books (1995).

Don't Tell Me About It, Write It!: How to Get and Write the News for Newspapers, The Press Journal (1963).

Articles: 1 Article for this author
Scotch for Breakfast (Trafford $24.95)
Info


With three previous titles under his belt, coastal roustabout turned journalist Fred Edge has fictionalized his memoirs in Scotch for Breakfast (Trafford $24.95). From an upcoast logging camp to Monte Carlo and Hollywood, the protagonist Conor Hayes is ultimately reconnected to a daughter he never knew he had. "Laurie, Laurie,"; Conor murmured. "If your mother and I had known that you were about to begin your miraculous swim for life, we would have married."; 1-55212543-2