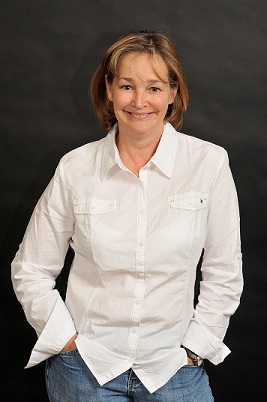 
Kate Edwards of Kamloops is one of nine B.C. writers among the sixteen contributors for 13 chapters and two endings in a collaborative novel, At The Edge (Unlimited Editions $20, 2013), edited and published by Marjorie Anderson and Deborah Schnitzer of Winnipeg. The story concerns a dangerous and unguarded construction hole on a university campus into which one person falls. Collaborators range in age from their thirties to their eighties. The other B.C. contributors are Jack Hodgins, Blanche Howard, Gail Anderson-Dargatz, K.W. Dyer, Arwen Brenneman, Elissa Frittaion, Matthew Hooton and Heather Jessup. 978-0-9919609-0-3

According to her website: "Katherine Edwards grew up on a working cattle ranch outside of Kamloops, B.C. where she experienced the ideal childhood. She rode horses, played with blue heeler puppies and tried in vain to climb into her brother's tree house. When she was thirteen she hauled a Royal typewriter, a small desk, and a table lamp into her bedroom closet, closed the door and wrote her first short story for an English class. She called it, The Horse.

"After graduating high school, Katherin ran away to join the Calgary/ Edmonton thoroughbred racing circuit where she worked as a groom and gallop girl for seven years. In 1981, after reading numerous Dick Francis mystery novels, she ventured to Newmarket, England and worked for racehorse trainer Ron Boss, at LaGrange Racing stable.

"When she turned 27 she went back to school to study horticulture with the intent of working as a head gardener at an English country estate. But as the saying goes, "Man plans while God laughs," and with his sense of humour, her life took a multitude of turns. She has since earned a living as a floral designer.

"Along the way she stopped off to earn a BFA in creative writing at the University of Victoria. She credits her instructors Steve Price, Carla Funk and Lorna Crozier as her inspiration for poetry and, Joan Weir, Bill Gaston, John Gould and Sean Virgo for her interest in fiction.

"In 2008 she settled back in Kamloops and enrolled in the MFA writing program through UBC. There she worked with Susan Musgrave, Wayne Grady and Gail Anderson-Dargatz. She graduated in May of 2013 . Her thesis work was a novel about racehorses and life."