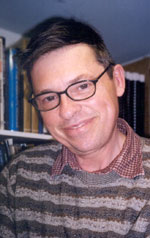 
Born in Vancouver in 1951, David Ellis has been a commercial fisherman on the Pacific Coast where he became acquainted with First Nations elders Luke Swan of Ahousat and Solomon Wilson of Skidegate, recording their knowledge of Aboriginal use of intertidal zones. As the son of Bill Ellis, he has continued his father's business of privately selling maritime and First Nations titles, particularly to Aboriginal organizations and collectors. David Ellis co-authored Teachings of the Tides: Uses of Marine Inverterbrates by the Manhousat People (Nanaimo: Theytus, 1976; Victoria: Sono Nis, 1981) with Luke Francis Swan, born in 1893. He also co-authored The Knowledge and Use of Marine Invertebrates by the Skidegate Haida People of the Queen Charlotte Islands (Skidegate: Queen Charlotte Islands Museum Society, Monograph No. 1, 1981) with Solomon Wilson.

Articles: 2 Articles for this author
Have Books, Will Travel
Article (2015)


In 2015, at age 64, David Ellis noted he had 257 visits to First Nations in Western Canada (B.C., the Yukon, the NWT and Alberta) over a 24-year period, also noting that possibly only the explorer David Thompson might have visited more. As a travelling salesman for books, he has met hundreds of residential school survivors. One year he encountered six grizzlies. Here are just some of people he met during his travels.


David Ellis has expanded his father's unique operation as a travelling salesman who practices "precision bookselling in First Nations communities.

Ellis's father was pioneer B.C. bookseller Bill Ellis who served on the Native Arts and Crafts Committee to Ottawa, alongside Jim Houston and Bill Reid, that was instrumental in opening up the world market for Inuit and Northwest Coast First Nations art. He also broke new ground in the book trade as a mobile purveyor of First Nations [FN] titles.

"Dad sold his books from his home on Haida Gwaii,"; says David Ellis, "but he also sold on carefully planned road and boat trips to mainly FN communities. He noted to me that the era of bookstores was coming to a close as high rents and real estate prices had led to the need for a new business model-a travelling bookstore-something he had done already for twenty years, in B.C. and Alaska, with books and prints.";

After a stint in the fishing industry, returning to UBC to get a degree in Natural Resource Management, and another as a fisheries consultant to First Nations and others (fishermen and environmental groups, including the David Suzuki Foundation), David Ellis inherited his father's independent bookselling business in 2003.
When David Ellis took over his father's trade, he expanded the service area to all of BC, half of Alberta and the Yukon and NWT, and for the first eight years he focussed his business on bringing First Nations books to schools. In recent years, as literacy has increased in the First Nations communities, he has increasingly moved towards First Nations sales.

"Eighty per cent of my visits are now direct to FNs,"; he says. "So, for example, when I go on a trip now to visit the Shuswap people in the interior of B.C., I will have a full selection that now includes almost all of the books by or about them, ethnography, linguistics and archaeology, as well as other issues they are concerned about, such as pipelines and historic references to past salmon abundance. In fact, I even hiked the pipeline and did some research of my own. These trips take a lot of research and pre-buying and when I am on the road I often travel in the evenings, sometimes 100 km to the next community.";

First Nation in each valley has a different local history, so Ellis brings the exact books germane to each area. "It's kind of like hitting the moon with a rocket,"; he says. "I call it precision bookselling.";
David Ellis now has about 60,000 books for and about more than one hundred First Nations, expanding his father's original inventory from the 20,000 he inherited. He works on about a three-year rotation, over a vast western area-from Haida to Dene to Blackfoot to Kootenay-but his job has become much easier with the advent of more paved roads.

"This work is exciting and fun!"; he exclaims. "A few weeks ago I was eating dried pounded caribou meat/belly fat with the Tlicho, formerly "Dogrib"; people, near Yellowknife. In the spring, when I visited the Nuuchnulth people on the West Coast of Vancouver Island, I was eating boiled chiton with them, a special seafood unknown outside the native community.";

In the winter, when he can't go on trips, he supplies university and library archives, often selling self-published local histories that he comes across during his summer trips. He also sells antiquarian books. For example, Ellis recently came into possession of a rare title by pioneer artist Paul Kane.

Often considered the founding father of Canadian art, Paul Kane was the first professional Canadian artist to skillfully depict the Pacific Northwest. Among his subjects was Chief Sepayss, aka Chief of the Waters, who was the father or grandfather of Chilliwack Chief William Sepass (aka K'HHalserten, meaning "Golden Snake";) of Skowkale, near Sardis in the Fraser Valley. William Sepass, it might be noted, became the earliest-born (but not the first) Aboriginal author in British Columbia.

Nearly one hundred of Kane's sketches have survived from his three months spent on and around the southern tip of Vancouver Island. In 1847, Kane painted Fort Victoria and individual Aboriginals from different tribes who were visiting that fort. As the result of his unprecedented work along the Western Slope, Paul Kane became the first Canadian painter to have a best-selling book. His Wanderings of an Artist, published in 1859, was soon translated into French, Danish and German.

David Ellis is now selling the German edition of Paul Kane's pre-gold rush account of coming over the Rockies and both observing and painting almost pre-contact First Nation life. "When I recently purchased a collection,"; Ellis says, "in it was the original German first edition that I noted had some value on the internet. Attached to the copy was a photo of a tree blaze Kane had autographed and dated. So now I am trying a sort of 'internet auction' to contacts I have developed along Kane's route over the Rockies to Victoria. I now have 100 email contacts along the route, a new way of selling, I hope, as I get a bit older!";

Every book he sells has a story with it. For instance, for the obscure Kane volume, he talked to people in Grande Cache, Alberta, whose Métis relatives had guided David Thompson over the Athabaska Pass in the Rockies on their new trail. This was the fur trade trail that Paul Kane took to reach Victoria.