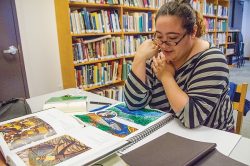 
Laura Ellyn, a writer and editor born and raised in Cumberland, B.C. but now based in Montreal, published a graphic novel-styled account about the life and death of Vancouver Island's most well-known labour martyr, Ginger Goodwin: A Worker's Friend (Between the Lines 2015). Her graphic history is a vibrant addition to two previous books on Goodwin by Susan Mayse and Roger Stonebanks.

Ellyn studied Women's Studies and Fine Arts at Concordia University. Her work has appeared in Bitch, Briar patch and the Vancouver Review.

In 2018, Ellyn completed the graphic novel, See With Your Own Eyes: The Sybil Andrews Story (Campbell River Arts Council 2018). The book provides contextual background to the artist's life and work, and cites insightful quotes from Andrews' such as her reaction to the growth of modernist art in the early 20th century: "These radical artists are right. They represent a new beauty... a longing for new versions of truth observed." About moving to Campbell River with her husband Walter Morgan in 1947, Andrews said, "After looking around the Island and the main land of BC we came back to...Campbell River, a great centre for the salmon fishing. We bought an old house on a beach near Willow Point, with a sea outside our garden gate and our boundary the high tide line - a 'corner of a foreign land that is for ever England.'"