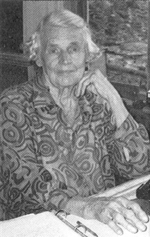 
Despite its unsophisticated cover, River of Tears (1992) by Maud Emery is a sincere attempt to emphasize how Chilcotin Indians were beset by white man's smallpox, degraded by white man's drink and had their ancestors' graves desecrated during Alfred Waddington's attempts to build a "highway to heaven"; to the Cariboo gold fields from Bute Inlet. Written as a novel, it suggests Aboriginals working for Waddington had not received their wages prior to the coming of bad weather and their grievances in this regard were not taken seriously. Dedicated to "Truth, Justice and Honour";, Emery's simple version of the Bute Inlet massacre was criticized for its lurid cover painting graphically depicting the slaughter known as the Chilcotin Massacre. Superficially viewed as politically incorrect and naive, Emery's attempt to imagine history was not taken seriously despite her efforts to enter the hearts of two women as central characters. Emery's viewpoint echoes historian Judith Williams' underlying theory about sexual abuse. "Yes, they take our women,"; says one character. "It is shame. To white man's eyes, Indian woman is to use and to leave-only 'savages', not worthy of white man's respect."; Maud Emery's previous books were A Seagull's Cry (1975), a pioneering story set in Toba Inlet, and Jean Pauline, An Indian Tragedy (1976) in which an Indian girl wants to uphold her traditional right to live off the land. Maud Emery worked as a secretary for lawyers, insurance agents, real estate companies and the municipalities of Courtenay and Campbell River. She died on March 4, 1992.