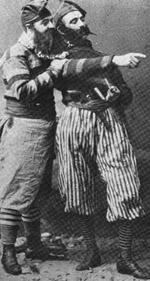 
Born in Victoria in 1951, Chad Evans is a sixth-generation British Columbian who worked as a heritage consultant until 1981 when he moved to Australia. The history of pioneer theatrical culture in the Pacific Northwest from 1850 to 1900 is the subject for his Frontier Theatre (Sono Nis, 1983).

Formal theatre in the European tradition began with presentations by sailors of the British Navy as early as 1853.

The Royal Engineers built a theatre in New Westminster about eight months after their arrival and presented light theatrical fare at the Theatre Royal as early as Christmas, 1859. In 1861 the visiting actress Lulu Street performed in Vancouver and inspired an admirer to name Lulu Island in her honour. The Dramatic Association in Victoria was formed in 1862. Poet James Anderson participated in the Gold rush theatricals that were presented in Barkerville during the Cariboo gold rush by the Cariboo Amateur Dramatic Association. The Amateur Dramatic Club of New Westminster began in 1866. Similar groups formed in smaller towns. Early theatres in Vancouver included the Opera House (1891, demolished in 1969), the Pantages Theatre (1908), the York (1912) and the Orpheum (1927), but the senior theatre was Keefer Hall built after the city was destroyed by fire in June of 1886. The CPR built the 2,000-seat, $100,000 Vancouver Opera House at Georgia and Granville. Its opening production was Lohengrin starring Emma Juch. Mark Twain appeared there 1895; Nijinsky danced there with the Ballet Russe in 1917. Sarah Bernhardt performed at the Orpheum Theatre in 1918. The Vancouver Shakespeare Society was formed in 1916. Shakespeare plays were presented at the Malkin Bowl in Stanley Park. Renamed the Lyric, the Opera House became a movie theatre in 1935. It was later demolished to make way for Eaton's. Theatre Under the Stars lasted from 1940 to 1963; it was resurrected in 1969. Frederic Wood at the University of British Columbia helped to create the Players Club. Everyman and Totem Players were professional stage groups of the 1940s and 1950s. The Vancouver Playhouse arose in 1963, first mounting Brendan Behan's The Hostage. The Arts Club Theatre on Seymour Street opened a year later with a production of Moss Hart's Light Up The Sky. The first original Canadian play at The Vancouver Playhouse was Eric Nicol's Like Father, Like Fun in 1965. The New Play Centre was created in 1970; Tamahnous Theatre was born a year later, followed by City Stage (Ray Michal) and the refurbished opening of the Vancouver East Cultural Centre in 1973. Bard on Beach was spearheaded by Christopher Gaze in 1990. (A lecturer in English at Simon Fraser University, Sheila Roberts claims in her book Shakespeare in Vancouver that the first Shakespearean production in Vancouver was a presentation of Richard III at the Imperial Theatre on December 5, 1889.) The Bastion and Belfry Theatres were the main venues in Victoria.

[Illustration: T.S. Gore and W.R. Higgins perform in the Victoria Dramatic Society production of Gilbert and Sullivan's The Pirates of Penzance, 1885]

Review of the author's work by BC Studies:
Frontier Theatre: A History of Nineteenth-Century Theatrical Entertainment in the Canadian Far West and Alaska

A Documentary History of the Cottonwood District, 1862 to 1913 (Parks Branch, Ministry of Recreation and Conservation, Province of British Columbia, 1978)