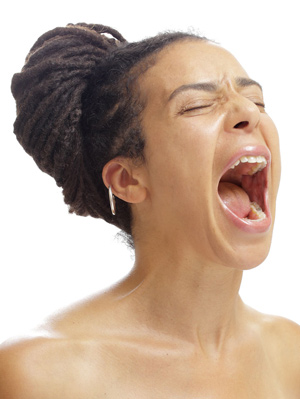 According to promotional materials:

Tanya Evanson of Vancouver is a Antiguan-Québécoise Poet, Spoken Word Artist, Vocalist, Whirling Dervish Dancer, Arts Educator and Director of Mother Tongue Media. She is the new Director of the Banff Centre Spoken Word Program and released "Language for Gods"; on October 31, 2012, her third studio album of spoken wor.l.d music.

As Mother Tongue Media, she has been writing, editing, leading workshops and producing intercultural and interarts events since 2000 including "Tales of Ordinary Madness"; spoken word series, "Under the Griot Tree"; black History Month arts festival, as well as ANU 8, 9 and 10 conceptual group performances.A classically trained Whirling Dervish since 2002, she has performed and taught extensively across Europe, Turkey, Japan and Canada from her bases in Istanbul and Vancouver. Performance highlights include whirling with Mercan Dede, Natasha Atlas, Ludovico Einaudi and Niyaz at AKM (Turkey), Barbican (UK), Club Paradiso (Netherlands), Etnosur Festival (Spain) and Ars Electronica (Austria). Open your arms if you want to be held.