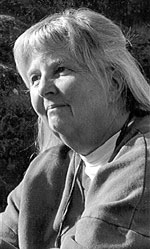 
Born in Darjeeling, India, Olivia Fletcher studied journalism in England and Wales before joining the Navy as a WREN coder. She has worked in Africa as the personal assistant to the Governor of British Somaliland. In 1953 she immigrated to Montreal, where she worked as a reporter for the Montreal Star. She moved to Hornby Island in 1958, marrying John Fletcher, and raised three children.

Her self-published Hammerstone: Biography of an Island (Hornby Island: Apple Press, 1989) is an unprecedented history of coastal geography that traces the genesis of Hornby Island back 350 million years. Illustrated by Jane Wolsak, it contains a glossary of place names and geological terms.

"I simply became interested in where I was," she says, "and started educating myself by reading and asking questions."