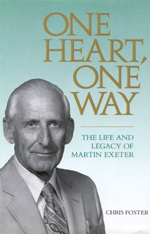 
Born in England in 1932, Chris Foster came to Canada in 1955 as a member of the Emissary community at 100 Mile House. Publisher of the Integrity International, the journal of Emissary Foundation International, Foster wrote a biography of Emissary leader Martin Exeter, seventh Marquess of Exeter, who had lived at 100 Mile House from 1932 to 1987. It is called One Heart, One Way: The Life and Legacy of Martin Exeter (1989). He has also written two books of poetry and an Emissarian novel about the future of mankind, Bearers of the Sun, plus a modern parable that takes the reader into the interwoven lives of people, plants, animals and mother earth, Winds Across the Sky. The biography of Martin Exeter was edited by Brian Scrivener and published by the Emissary community.

Articles: 1 Article for this author
One Heart, One Way: The Life and Legacy of Martin Exeter
Article


THE CARIBOO TOWN OF 100 MILE HOUSE is known to most British Columbians as a gas 'n' doughnut stop on the road to the larger communities of Williams Lake and Quesnel.

Few realize that since 1954 it has been the focal point for a world-wide quasi-religious group known as the Emissaries of Divine Light.

The chief Emmissary was Martin Exeter the seventh Marquess of Exeter.

Exeter, who once owned much of 100 Mile House, is the subject of a new biography, One Heart, One Way: The Life and Legacy of Martin Exeter (Foundation House Publications $24.95), written by his philosophical soul-mate and fellow Emissary, Chris Foster.

Martin Exeter was born in 1909, in Burghley castle, on a vast estate at Stamford, England, built in the 1500s. While his older brother Thomas was groomed for a career in British politics, Martin entered a naval academy and served in the Mediterranean.

Not long after Exeter fell in love with a beautiful Hungarian girl in Monte Carlo, he accompanied his father to 100 Mile House to assume stewardship of enormous land holdings purchased by his father back in 1912. After his arrival at 100 Mile House in 1930, when the town was little more than a few moss-covered cabins, 21-year-old Martin set to work ranching and opening 100 Mile Lodge two years later.

Exeter eventually married the girl from Monte Carlo in 1934, at a Surrey, England wedding that was covered by the English press. Back in Canada, where he became president of the Cariboo Stockmen's Association, Exeter was attracted to the Depression-era spiritual writings of an American mystic named Lloyd Meeker, with whom he continually corresponded.

In 1954 Exeter's first wife died and he remarried the same year. Alsoin 1954, when his mentor Lloyd Meeker was killed in a plane crash, Exeter took over stewardship of the Coloradobased community that Meeker had founded in 1932.

Exeter commuted between 100 mile house and Colorado, accepted the services of Meeker's personal secretary, and gave inspirational addresses at various symposia. By 1969 he was conducting Easter morning services through a coast-to-coast telephone hook-up to nine Emissary centres.

Not a cult, not a religion, the Emissaries profess not to worship any diety. Nevertheless, they share a belief in the presence of a higher power. which will be expressed in people if they live simple lives, accept life's curve balls, and care for each other.

According to biographer Chris Foster, Martin Exeter's "legacy to humankind" consists of twelve "global communities"; eight in Canada and the U.S., plus sister communities in Cape Town, Australia, England and the French Alps.

Paperback collections of his talks, Being Where You Are and On Eagle's Wings, were published in 1974 and 1977, followed by a compilation volume, Beyond Belief: .Insights to the Way It Is, in 1986.

Exeter's books and other Emissary literature are available from Foundation House Publications. Exeter's biographer, Chris Foster, publisher of "Integrity International Newsletter";, has published an Emissarian novel about the future of mankind, Bearers of the Sun.