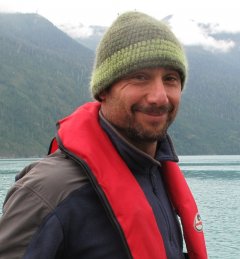 
Addressing his three-year-old daughter Twylla Bella, Alejandro Frid of Bowen Island tells her he has "jettisoned my gigantic cynicism, at least most of it for most of the time, and focused on the positive and the doable" in order to write A World for My Daughter: An Ecologist's Search for Optimism (Caitlin $24.95), his compendium of person experiences as a wildlife researcher in Alaska, Chile and central British Columbia, as well has his involvements in environmental protests and rallies in Vancouver.

An ecologist for First Nations on the central B.C. Coast, Dr. Frid was born and raised in Mexico City and has lived most of his adult life in B.C. He has been arrested twice for civil disobedience against fossil fuel companies. In this first book, originally self-published with a limited print run as Storms and Stillness (2014) and since re-edited, he focuses on grounds for optimism. In 2015 he appeared at both the Vancouver Writers Festival in October and the Jewish Book Festival in Vancouver in November.

It's time for everyone to take more responsibility for Earth, Ocean and Sky

Based on Gabriola Island, New Society Publishers, has been recognized as a Best for the World: Changemaker in recognition of their overall impact on their workers, customers, communities, the environment and governance.

They are unified by the common goal of redefining success in business.

Anthropocene has become an environmental buzzword since the atmospheric chemist and Nobel laureate Paul Crutzen popularized it in 2000. Basically, anthropocene, as a noun, is a fancy new term for our current geological age --since the Industrial Revolution -- during which human activity has been the dominant influence on climate and the environment.

As an adjective, anthropocene basically stands for human-influenced. It includes climate change, but it is not limited to it. In his Changing Times, subtitled 'An Ecologist's Journey to Make Peace with the Anthropocene,' a follow-up to his A World for my Daughter, Frid is trying to encourage us all, as a species, and as individuals, not to be disheartened.

There is hope. He envisions a future in which we can increasingly fuse Western science with the ways of Indigenous cultures who have, over thousands of years, developed "intentional and socially complex practices" for resource management.

We have to get our minds out of the previous century. And get our minds back through many centuries. Cynics are free to dismiss such idealistic fusion as pie-in-the-sky claptrap to get grants, but cynicism only speeds our collective demise as a species. Frid sincerely believes different cultures can and should intermingle.

"A fundamental characteristic of Coastal First Nations and other Indigenous peoples," he writes, "is their collective and culturally-based ethos for kinship and responsibility towards the non-human world that goes back for many centuries.

"These are the ripples and powerful waves that emanate from a long line of ancestors speaking on behalf of Earth, Ocean and Sky."

Frid credits the tremendous generosity of First Nations who have allowed him to get out and get wet and dirty alongside them, sharing their knowledge during collaborative research, while also fishing or hunting and butchering ungulates, or gathering medicinal plants.

Changing Tides chiefly describes specific West Coast instances in which the knowledge of Wuikinuxv, Nuxalk, Heiltsuk and Kitasoo/Xai'xais peoples have benefited conservation and influenced the attitudes and policies of the Department of Fisheries and Oceans (DFO). There is also recognition for the expertise and contribution of DFO officers who have increasingly learned the merits of cooperation versus the pitfalls of confrontation.

Recalling his collaborations with First Nations of coastal B.C. since the 1980s, Frid is not averse to evoking spiritual moments, waxing poetic when the surface bubbles as herring aggregate, when the sea turns light turquoise as males release clouds of milk ... when Stellar sea lions and Pacific white-side dolphins charge into massive fish schools ... when Humpback whales breach ....

When Frid finds himself on a boat, with the engine turned off, the scientist becomes a meditative philosopher, and he stops thinking about the impacts of colonization, he stops imagining the carbon dioxide being absorbed into the water ....

"Temporary insanity, willful myopia -- call it whatever you wish. All I know is that such moments help shape the stories I continue to tell myself about where humanity could go."