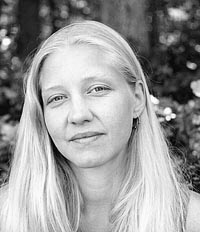 
Carla Funk served as the City of Victoria's inaugural poet laureate from 2006-2008. She teaches in the Department of Writing at the University of Victoria and received the 2012 Constance Rooke Creative Non-Fiction Prize [see below].

Carla Funk grew up in Vanderhoof, the geographical centre of B.C., originally a Mennonite settlement. "Having grown up in a world of logging trucks, storytellers, ladies' sewing circles and rural realism," according to her entry in Force Field, "she turned to poetry as a place to down the images of her upbringing."

She wrote a memoir, Every Little Scrap and Wonder: A Small-Town Childhood, in 2019, described as "part ode to youth, part love letter to rural life."

She completed her BFA in writing and her MA in English Literature at the University of Victoria. Her poems have been featured in anthologies such as Breathing Fire: Canada's New Poets (Harbour, 1995), Hammer & Tongs: A Smoking Lung Anthology (2000), Introductions (Fitzhenry and Whiteside, 2001), Force Field: 77 Women Poets of B.C. (Mother Tongue 2013) and as part of Translink's Poetry in Transit project.

As its title suggests, Every Little Scrap and Wonder: A Small-Town Childhood gathers a godly share of memory's odd rags and remnants, stitching them into a warm quilt that evokes a Mennonite childhood in Vanderhoof.

It's the first non-fiction book by Carla Funk, who has published five collections of poetry, most recently 2016's Gloryland. Based in Victoria, she taught writing for 15 years at the University of Victoria and was the city's first poet laureate from 2006 to 2008.

This latest offering, a memoir, has a structure as formal as a patchwork quilt: four sections with six vignettes, each grouping linked to one of the four seasons. They are topped and tailed by two additional texts that provide context and reflect on the core values of her childhood -- including thrift, tradition and, above all, faith. The metaphor of the quilt as memory-holder is not incidental -- the theme is underlined in the book's opening, "Patchwork Crazy Quilt," and the closing, "Taking Up the Remnants."

"Pluck one memory from the album and the story doesn't hold, won't bear up," Funk writes. "The single part won't speak the whole. But honour the fragments, all those broken pieces, and see them find a true design, fitting to the patterns of a bigger story, no matter how small the town, the life, or the child."

Funk's move to prose from prosaic poetry is more a step than a leap, and similar themes recur in both. For instance, "Secrets," a poem in The Sewing Room, one of Funk's earlier books, is here transformed into the humorous account "Every Hidden Thing." It tells how her grandfather secretly salvaged several pallets of still-frozen ice cream from the dump and distributed the windfall to family members. After Carla divulges the secret of the ice cream's origins to a friend, her mother spanks her with a wooden spoon, fearful the neighbours will label the family "as dirty, as dump-divers." The delicious irony, of course, is that Funk's childhood lesson about preserving a public facade seems to have melted away, this time before a much wider audience.

It's hard not to sense an incipient poet's proclivities at work as young Carla roots into the muck and fervour of daily life, gum-boot deep in sensory perception. Her mother's hug delivers "a perfume of Avon lotion and spearmint gum." On butchering day, she plays catch with a "warm and wobbly" pig's bladder, ominously full. When her father is away, she sneaks into his workshop, reveling in this place of "big rigs, horsepower, air horns, oil drums, tire guns, ratchets, rad hoses, woodsmoke, whisky, country crooners, raunchy laughter, and ashtrays brimming with ash and smouldering cigarettes."

Funk largely takes a child's-eye view, with all the foreshortening that implies, a strategy with both strengths and challenges. The flip side to the rich language borne by the immediacy of a child's experiences is less perspective and context. The book cannot fairly be described as a portrait of Vanderhoof as it mostly describes the circumscribed territories of childhood -- her family's home and the nearby bush where she played, as well as visits to her grandparents, the Sunday trips to church, and the like. As she says at the outset: "I knew nothing of my hometown's history."

A motley array of neighbours and family friends weave their way through her pages, their eccentricities sketched as a child might see them. Sometimes it's easy to read between the lines and draw conclusions, but I also found myself wondering about deeper issues, like the Indigenous land on which the community was built or how tensions between Carla's devout mother and her truck-driving father, who generally took a pass on church, would play out.

Young Carla yearns for transcendence, but is also a scrapper, playing devious pranks on her older brother and joining war games with the neighbourhood boys. Always curious, she pokes into things, tests boundaries, and once falls off a forbidden roof. Such accounts give the book a boost of narrative energy. Who, for instance, can resist this opening: "In the musty heat of the canvas tent, I sat brushing Malibu Barbie's shiny blonde hair, wishing for a gun."

Like a patchwork quilt, the book points to specific memories while remaining impressionistic in the ways they are juxtaposed. The chronology is murky, and Carla's age seemingly mutates through different accounts from early childhood to a girl whose awareness of the growing rift between boys and girls points to the imminent changes of the teen years.

The book's rural setting, traditional ways and biblical parables further encourage temporal drift. At times, I found myself slipping back further than the 1980s, presumably the era of most of the story given that Funk was born in 1974. Pop culture references to things like warped 8-tracks, Agent 007 or Rambo would then wrench me forward to a more recent past.

And what of writing? In "The Typewriter," Funk describes lugging books home from the library, and her first diary, where "every lie, every black thought and harsh word, every pig, jerk, stupid-face, idiot, loser, bugger-off, moron -- they sang on the page." Along the way, she learned to type by following lessons on a vinyl record. As she punches the typewriter's keys, she feels her body "shift into someone smarter ? someone who might write a book, the kind real people would actually read."

Articles: 2 Articles for this author
Blessing the Bones into Light (Coteau $9.95)
Article


You know the Interior.

Miles of clearcut, miles of trees, bales of hay in fields, cows in the distance. Little towns with a strip-mall, a rec centre, and pickup trucks everywhere. "Grad '99" spray-painted on the cinder block of the high school. All the men wear baseball caps, and the women curl. If there are any poets at all, they are tough and swaggering; they ride language like a snowmobile. Nobody is expected to write a love poem to soap:

You who smell of
satsumas unpeeling,
gardenias foaming at
the petals,
water lilies washing
themselves in a bath of
their own perfume.

The Interior does not produce a poet who reflects on Bach's unaccompanied cello suites or captures the exact point of balance in adolescence with the word almost.

He is fifteen and spends late evenings
in the barn on the telephone telling a girl
almost everything.

But Carla Funk is such a poet. She grew up in the quintessential small town of Vanderhoof at the geographical centre of British Columbia. Vanderhoof, as you might imagine, is an agricultural and logging town of conservative values and plenty of pickup trucks. It also has a substantial Mennonite community, in which Carla was raised.

It is tempting to say that Blessing offers a breadth of subject matter and imagery, a clarity of vision and a subtlety of sensibility, that belies Funk's origins and are extraordinary for someone 25 years old. Her first book, Blessing the Bones into Light (Coteau $9.95) rings with both a deep seriousness and an expansive lightheartedness.

But poetry is neither determined by place, nor free of it. Funk's first immersion in language was in the Bible, the sound of it read aloud throughout her childhood. She has been influenced by the terror of Revelations, the imaginative landscapes of the Book of Job-and it was an initiation into the power of language that has led her to map the terrain of the soul and also to transform it.

"I longed for something beyond the ordinary, beyond Vanderhoof, beyond the happy, everyday childhood I had,"; she says. "There's something about boundaries that I wanted to go beyond.";

Blessed with encouragement in high-school, she recalls one creative writing graduate had covered the walls of her classroom with poetry. "I can still remember reading a line on the far, left wall - it was by e.e. cummings. 'no one not even the rain has such small hands'. I fell in love with that line, with words, with the writing on the wall.";

At the University of Victoria, Patrick Lane wrote in the margin of her first workshop poem, "Why Law? Why not poetry instead?"; A voice from the burning bush to an ear already attuned. Funk's work first appeared in a Harbour anthology of new Canadian writers, Breathing Fire, edited by Patrick Lane and Lorna Crozier; it now appears courtesy of Coteau's Open-eye Poetry Series.

Blessing the Bones into Light not only illuminates Funk's potential; it points to the potential of scattered communities and our disparate lives scattered among the clearcuts. It opens up, in Funk's own words, "the space of the page as a clean landscape where we can draw our own borders."; 1-55050-156-9


The Malahat Review congratulates Carla Funk of Victoria, BC on winning our 2012 Constance Rooke Creative Nonfiction Prize! Her story, "Returning,"; was chosen from 125 entries by our final judge, Madeline Sonik. Funk's story will appear in our Winter, 2012 issue (#181). She was also awarded a $1000 CAD prize.

Description: Of Funk's story, Madeline Sonik said: "I was initially hooked by the relentless, poetic list of images that opens this piece and leads the reader to the leitmotif of the 'snow geese.' Just as the narrator is distant from the dying, self-destructive father (both physically and emotionally) the reader, too, enters this story with a long-distance view of the narrator's world. Skilfully, the writer uses small and subtle details to draw us closer, revealing the tragedy of estrangement and the grace of consciousness and reconciliation. The narrator tells us, 'the decades locked like winter in me seemed to shift' as the father, a diabetic with vascular dementia who is expected not to 'last long,' returns from a near death experience. Interestingly, it's not the narrator's desire to make peace with the past that facilitates this thawing, but the father's new-found vulnerability, which is never stated, but rendered with authenticity and precision. Dialogue, though spare, captures the essence of characters and the constructions of family. For example, as the father begins to rally, asking for watermelon, his own 90-year-old mother, sitting in her wheelchair, announces: 'This happens to the dying...They need a little something to make it to the end.'"