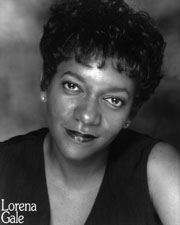 
"Born in Montreal, Lorena Gale is an award winning actress, director and writer. Her first play, Angelique, had its American premiere at the Detroit Repertory Theatre, and off-Broadway at Manhattan Class Company Theatre, where it was nominated for 8 Audelco Awards. Her What Colour is Black: Art, Politics and Racial Identity premiered in the Halfbred Performance Series at The Grunt Gallery. Her most memorable stage performances include Normal Jean in The Coloured Museum, and Hecuba in Age of Iron at the Firehall Theatre, for which she received a Jesse Richardson Award. Je me souviens was nominated for three Jessie Richardson Awards in 2000: Best Actress, Best Direction and Best Production. Je me souviens was also nominated for the Govenor General's Award for Drama." - Talonbooks promotional copy, 2004

Articles: 1 Article for this author
Je Me Souviens (Talon $15.95)
Article


Greetings from soggy Vancouver!" writes Lorena Gale in a letter home to Montreal. "There are no black people... I can go for days where the only black face I see is my reflection in a store window. ..And everything shuts down at one a.m. like some fucking temperance colony. You can buy pornography at the corner store but not beer and wine... It's like there is some law against having a good time here. The B.C. No Fun Law." Gale's racial and ex-patriot frustration is tempered with humour as the autobiographical protagonist reconstructs her Montreal childhood and move to Vancouver. A dramatic monologue, Je Me Souviens (Talon $15.95) started as a reaction against Jacques Parizeau's referral to minorities as "goddamn ethniques." "I sat down to write an essay, a rebuttal, a scathing criticism of Mr. Parizeau," she says. Instead she re-created her childhood and coming-of-age, which she brings to life on stage. "For 75 minutes, I get to go back to my Montreal and hang out with those I love." And hanging in Montreal means eating. "I crave; the flavours of my past: smoked meat at Schwartz's, Schuller kosher barbecue potato chips, dry garlic spareribs at the Dragon Inn, orange tarts at Cafe Castillo, pineapple chicken at Lung Fungs, blueberry cheese cake at Le Commencal.. ." Ie Me Souviens was nominated for three Jessie Richardson Awards in 2000: Best Actress, Best Direction and Best Production. 0-88922-453-6