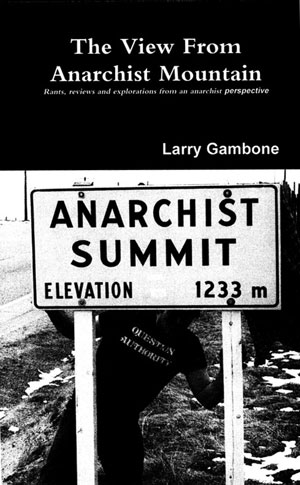 Long before Greenpeace was founded to protest the bomb-testing at Amchitka, Larry Gambone was participating in the peaceful 'Ban-the-Bomb' protests at the Comox Air Force Base. Specifically, activists were protesting Prime Minister Lester B. Pearson's decision to allow nuclear warheads on Canadian soil. Approximately 50 activists were prevented by police from entering the facility to "dismantle" it on June 6, 1965. They sat down and blocked the road for 24 hours. Many returned on August 28 to block all 14 entrances to the base. These anti-war demonstrations galvanized Gambone's political idealism chronicled in his memoir, No Regrets, and also his collection of personal essays, The View from Anarchist Mountain.

Warheads at Comox were independently governed by the decisions and actions of a U.S. Air Force unit stationed at the Comox base. Nonetheless, an annual report for the base in the early 1980s claimed Comox "was the last unit in Canada to have the vast responsibility for the direct security of nuclear weapons and components."; Eventually, on June 28, 1984, the last nuclear warhead in Canada--at Comox--was returned to the United States after a 20-year deployment. In the summer of 2015, Larry Gambone marked his 50th year of social activism with a reunion of dozen Comox ban-the-bomb campaigners at Roberts Creek.

Larry Gambone is a founder of Red Lion Press which was started in 1984 with the publication of Joseph Dietzgen's "Nature of Human Brain Work.". The following year the press began to publish a series of chapbooks from 12 to 28 pages on labour, social history and anarchism. Since that time--as of 2015--they produced more than 20 chapbooks, five full-length books of which 7400 copies were sold or distributed.

Larry Gambone's Vancouver-based memoir, No Regrets (Edmonton: Black Cat Books 2015 $20) recalls his counter-culture activities on the West Coast including recollections of consorting with both beatniks and the Yippies, "invading" the U.S. at Blaine Washington and civil disobedience in the early days of the Ban the Bomb movement. Gambone's memoir includes his visits to Toronto, Mexico, San Francisco, Berkeley, London and the Kootenays.

Larry Gambone grew up in logging towns on Vancouver Island, British Columbia, where he was active in the anti-nuclear weapons 'Ban-the-Bomb' movement. He attended Simon Fraser University between 1967-70 and was involved in the campus New Left. He formed a campus IWW branch, and later joined the Vancouver Yippies.

Gambone briefly lived on a commune in the Kootenays in the 1970s, he helped form the anarchist paper Open Road and he became involved in the Surrealist Movement. In the 1980s he began a serious study of working class movements and the autodidact thinkers that influenced them, which led to his interest in the writings of Joseph Dietzgen. Gambone has continued to study and write about anarchism and other social movements.

The View From Anarchist Mountain (Red Lion Press $16). Articles from the last 20 years on a variety of topics, including social psychology, anarchist economics and history, social commentary and much more.

The Impossiblists (Red Lion Press $10). Selected Articles From The Socialist Party of Canada and the One Big Union, 1906-1938. Revised edition with added material. Includes the writings of Ginger Goodwin.

The Nature of Human Brain Work: An Introduction to Dialectics by Joseph Dietzgen and Larry Gambone (Fernwood $19.95). Called by Marx "The Philosopher of Socialism,"; Joseph Dietzgen was a pioneer of dialectical materialism and a fundamental influence on anarchist and socialist thought who we would do well not to forget. 9781552663929

Review of the author's work by BC Studies:
No Regrets: Counter-culture and Anarchism in Vancouver

* VANCOUVER YIPPIE by various authors - the story of this infamous Yippie group and its relationship to the development of anarchism in Vancouver. (2007) 16 pages, $2.00

* THE PRIMAL WOUND by Larry Gambone. Explores the origins of authoritarianism and mental illness, neither of which are seen as inevitable. Based on up-to-date archeological, anthropological and climatological evidence. (2005) 16 pages, $2.00

* THE REVOLUTIONARY FORCES by Sebastian Faure. Translation of one of the seminal articles of French anarchism. Faure was a major influence on the contemporary French Anarchist Federation. (2005) 12 pages, $2.00

* MAKING CONTACT by John Griffin. Further explorations into the application of Reich's ideas by the military (2003) $2.00

* REAFFIRMIMG REICH by John Griffin . An examination of Wilhelm Reich's experiments in weather control and a discussion of Reich and UFOs. Author attempts (successfully) to verify Reich's claims through the use of dowsing techniques. Includes information on Trevor Constable, Jerome Eden, Harry Oldfield and Ruth Drown and the US military use of the cloudbuster. 22 pages, $3.00

* THE IRON FIST BEHIND THE INVISIBLE HAND - Corporate Capitalism As A System Of State-Guaranteed Privilege. By Kevin A. Carson. A contemporary anarchist economic discussion of the development of corporate capitalism. 24 pages, $2.50, (2001)

* FOR COMMUNITY An Introduction to the Communitarian and Mutualist Anarchism of Gustav Landauer. 14 pages, $2.00 (2001)

* THE ANARCHISM OF EMILE ARMAND - A selection of the writings of the French individualist anarchist. Armand was the last survivor of turn-of the century French anarchism, dying in his 90's in 1962. 16 pages, (2001) $2.00

* CAPITALISM IS NOT FREE ENTERPRISE. By Hans Feldt. An introduction to the economic ideas of Silvio Gesell. Influenced by Proudhon and Henry George, Gesell was also a friend of Gustav Landauer. (1997) 12 pages, $2.00

* PROUDHON AND ANARCHISM - A new interpretation of Proudhon's anarchist philosophy and its relationship to the anarchist movement as it developed in the 19th Century. Why Proudhon is important today. (1996) 12 pages - $2.00

* COSMIC DIALECTICS - Joseph Dietzgen's unique anti-sectarian and libertarian thought. Its impact upon the labor movement and its importance today. (1996) 20 pages - $2.50

* SYNDICALISM - IN MYTH AND REALITY - A critique of academic myths about anarcho-syndicalism. A first-time historical comparison and general compilation of membership statistics. (1995) 14 pages - $2.00

* REVOLUTION AND REFORMISM - The origins of the split between "revolutionaries" and "reformists" in the French CGT. Re-evaluating the "reformists" as Proudhonists seeking to update anarchism. (1995) 17 pages $2.00