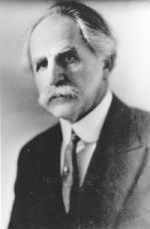 
Many British writers traipsed through colonial British Columbia and offered their tour notes in book form--so did a few Americans. Noteworthy among these literary tourists was Hamlin Garland, a Pulitzer Prize winning lecturer and memoirist. Seeking material about the Klondike gold rush, Garland lamented the loss of 'wild places' in North America as technology moved constantly westward and northward in The Trail of the Goldseekers (1899). It's one of the earliest expressions of concern for threatened wilderness in British Columbia, if not the first.

Born in West Salem, Wisconsin, on 14 September 1860, Hamlin Hannibal Garland was raised in Iowa and South Dakota, and went to Boston in 1884 intent on being a writer. His first short story collection was Main-Travelled Roads (1891). He moved to Chicago and released essays in Crumbling Idols (1894), a novel called Rose of Dutcher's Coolly (1895), and began travelling through the west, studying Indians and cowboys. McClure's Magazine published his serialized biography of Samuel S. McClure in 1898. His record of the Klondike Gold Rush in prose and verse was The Trail of the Gold Seekers. He married to Zulime Taft in 1899 and proceeded to churn out western romances. His short stories from Prairie Folk (1892) and Wayside Courtships (1897) were combined into one volume for Other Main-Travelled Roads (1910). He moved to New York City in 1915. A critically acclaimed autobiographical survey of westward expansion called A Son of the Middle Border (1917) led to a sequel called A Daughter of the Middle Border, for which he received the Pulitzer Prize for biography in 1921. Some of his Indian stories were collected in The Book of the American Indian (1923). His family history series continued with Trail-Makers of the Middle Border (1926) and Back-Trailers from the Middle Border (1928). More memoires followed: Roadside Meetings (1930), Companions on the Trail (1931), My Friendly Contemporaries (1932) and Afternoon Neighbors (1934). After his move to Hollywood in 1929, he became fascinated with the occult, resulting in Forty Years of Psychic Research (1936) and The Mystery of the Buried Crosses (1939). He died in California on March 4, 1940, at age 79.