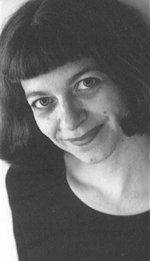 
Zsuzsi Gartner grew up in Calgary and has also lived in Ottawa, Toronto, Winnipeg and Vancouver. Her short story collection, All the Anxious Girls on Earth (Key Porter 1999) was followed by an edited collection of Canadian short stories about the future, Darwin's Bastard's: Astounding Tales from Tomorrow (D&M 2010). She has written for Saturday Night magazine and received a 2007 National Magazine Award for Fiction.

Her first, full-length novel, The Beguiling (Penguin $29.95 hardcover) was published in 2020. After hearing a deathbed confession from a cousin, lapsed-Catholic Lucy strangely starts getting bombarded with guilty admissions from other people. She starts liking the dark stories and is soon connecting them to her own errant past. Gartner's publisher says the book, "lays bare the flesh and blood sacrifices people are willing to make to get what they think they desire."

All the Anxious Girls on Earth (Key Porter 1999) Short stories.

Articles: 1 Article for this author
Info


The only thing wrong with Zsuzsi Gartner's debut collection, All the Anxious Girls on Earth (Key Porter $18.95), is that it has been over-praised-which is hardly the fault of the author. Reviewers in Toronto and Vancouver have gone bananas over Gartner's 'high octane linguistic rocketry'. But Gartner says when she read her work in Nanaimo, the audience was mostly dumbfounded.
"Lila had a heart like a monster truck-a V-8 engine that roared and seldom needed retooling, huge wheels that could drive over anything, fat pistons pumping for victory, a gas tank of biblical proportions, and was rust-proof to boot."; Her satire introduces a jilted office worker who places bomb threats and a green-haired girl who eats designer soap. And it forces literati, including her publishers-who misspelled her name on the advance copy-to add Zsuzsi to their spell-checkers. 1-55263-029-3