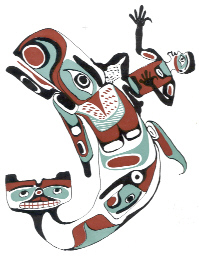 
Although the medical doctor Richard Geddes Large is credited as the sole author of Soogwilis (1951)-a Kwakiutl epic about a hero who encounters supernatural creatures, marries Klaquaek and confronts his human nemesis, Pahquees, an old medicine man-it was primarily the work of Charlie George of Fort Rupert, an outstanding carver and artist.

According to Large, his father (Dr. R. W. Large) received the 33 colour drawings within Soogwilis from Charlie George in the early 1900s when George was a young patient at the Bella Bella Hospital. Large, Jr. incorrectly described some of the illustrations as being "undoubtedly crude"; and explained how he came by the text that accompanies the paintings. "Many years later it was my good fortune to meet the artist and hear from his lips the stories which were meant to go with the pictures. The drawings have undoubted value as ethnological data. Most of the text is the original story [of Soogwilis, the central character] as told by Charlie George, but I have included two additional tales gathered in later years from other Indians, but all of Kwakiutl origin.";

Thanking folklorist Marius Barbeau for "his helpful criticism,"; Large, Jr. proceeded to blend the stories of Charlie George into one narrative in his attempt to "make this book at once ethnologically correct and interesting to the reader."; Charlie George has never been recognized as one of the first Aboriginal authors of the province.

[at right: "Klaquaek kidnapped by the Whale"]