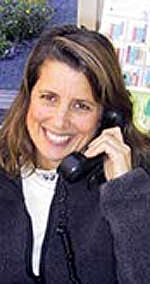 
"Growing your own tomatoes in a pot," says Spring Gillard, "or having a worm bin on your balcony is a political act, as much as a symbol of independence as Gandhi's spinning wheel." As editor of Compost Hotline News, an advice service that started on the City Farmer website in 1996, Spring Gillard gathered her diary entries with essays on city farming for Diary of a Compost Hotline Operator (New Society $22.95), complete with a cast of characters crazed by the gardening bug. She lives in Vancouver, having graduated from the University of Victoria with a major in French and linguistics. 0-86571-492-4

Articles: 1 Article for this author
Diary of a Compost Hotline Operator
Press Release

I have a very strange job. I'm the Compost Hotline Operator at City Farmer's Compost Demonstration Garden in Vancouver, Canada. City Farmer is a non-profit society, founded in 1978 to promote urban agriculture. The society is unique in Canada for promoting food gardening and environmental awareness in a variety of urban settings. City Farmer is celebrating its 25th Anniversary this year. In honor of our quarter century, we are building a cob garden shed, revamping our waterwise garden and throwing a couple of big bashes. Oh yeah, and my book Diary of a Compost Hotline Operator, Edible Essays on City Farming will be released this fall too by New Society Publishers. (Shameless self-promotion to follow).

For twelve years now, I have been answering compost crisis calls. Can I feed my worms rotten food or will it make them sick to their stomachs? Is incense ok in my compost bin? In addition to talking callers through their crises from my tiny greenhouse office, I teach "wormshops" and grass classes and record the antics of the silly farmers I work with.

In the fall of 1996, I began diarizing the day-to-day happenings at the garden for City Farmer's web site: Urban Agriculture Notes (www.cityfarmer.org). The web site receives over 10,000 hits a day; and the Diary has been one of the favorite stops. The web entries then expanded and evolved into a series of first person essays, many of which were subsequently published in the Vancouver Sun, Organic Gardening magazine, the Globe and Mail and other publications. One day I was leafing through my essays and realized I had enough for a book - and that's how the book version of the Diary was born.

This collection of edible (short, easy to digest) essays on my experiences in the field of urban agriculture is meant to educate and entertain. As you follow the antics of the crazy cast of characters at the City Farmer garden, I hope you will also learn something about composting, natural lawn care, food gardening and of course lust and love in the garden. If you havenĂ?t already got your own garden, maybe you will be inspired to plant one. There is a lot of information packed in around the essays and lists of contacts and resources to get you started or to enhance what you already know.

Gardening is now the nation's most ardent pastime with composting as its steadfast companion.The Composting Council of Canada estimates that over 1.2 million people are composting in their back yards. Encouraged by subsidized compost bin programs across the country, that number grows daily as does the need for current information on composting, natural lawn care, organic and waterwise gardening methods; all topics which fall under the urban agriculture umbrella.

Urban agriculture or city farming is an increasingly popular subject both locally and internationally. In the developed world, more and more people are concerned about their health and the safety of their food and prefer to grow at least some of their own fruit and vegetables. In the developing world, urban agriculture has provided a means of survival; my essay entitled The People's Plots in Cuba gives a slice of the Cuban story.

One of the lines I use in the "wormshops" I teach at the garden is: "At City Farmer, we believe that if everyone looked after their own back yard, the world would be a very different place." At work and in my personal life, I believe in setting an example and offering people solutions, even if they are small acts, like putting a worm bin on a balcony. It's why I felt so sympatico with my publisher, New Society. I was attracted to their mandate which is to help "build ecological sustainability and a just society" and their interest in nonviolent action. We're a very good fit.

So, sure I think that the Diary would be a nice gift book for your green-thumbed friends. But I believe urban agriculture appeals to the non-gardener too, anyone looking for practical steps they can take in their own backyard and home to create a healthier environment for themselves and their families.