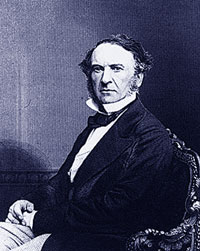 
Eloquent, religious and moralistic, W.E. Gladstone is well-known as a Liberal adversary of Queen Victoria, serving as Prime Minister four times (1868-1874, 1880-1885, 1886, and 1892-1894). He is less remembered as a staunch advocate for the development of Vancouver's Island outside the purview of the Hudson's Bay Company. In 1897, a year before his death, Gladstone recalled, "I never could believe, especially considering the prior decisions of the Courts on monopolies, that it was legally in the power of Charles II to mark off a vast portion of a continent, and invest a handful of his subjects with power to exclude from those territories all other subjects of the Crown."

Born in 1809, Gladstone entered Parliament as a Tory in 1833 and was soon appointed undersecretary for war and the colonies in 1835. He was elevated to the position of Colonial Secretary in 1845 but resigned, with his mentor Peel, in 1846 following repeal of the Corn Laws. Realigning himself with Liberals as a supporter of free trade, Gladstone assiduously studied the future of the West Coast of North America in general, and Vancouver's Island in particular, in August of 1848. With the support of James Edward Fitzgerald, he intended to write about the relationships between the Colonial Office, the Hudson's Bay Company and Vancouver's Island, and remained a lifelong critic of monopolies in general, and the Hudson's Bay Company in particular. Gladstone became chancellor of the exchequer (1852-1855, 1859-1866) prior to his ascension to Prime Minister. [See biographies by J. Morley (3 vol., 1903, repr. 1968), P. Stansky (1981), R. Shannon (1984), H. C. Matthew (1989), and R. Jenkins (1997).]