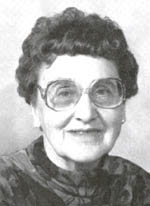 Co-author of The Life and Times of Grand Forks (Blue Moose Publications, 1997), with Jim Glanville.