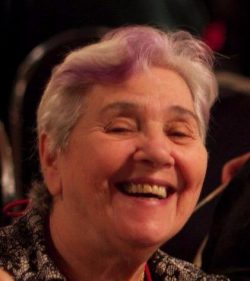 
Vancouver author and activist, Gloria Levi was born and raised in New York City. In 1950, at the age of 19 Levi traveled to what was then the newly-formed country of Israel. Intending to just stay for the summer, she falls in love with a man she meets en route and shortly thereafter, Israel too. She gets pregnant and decides to remain in Israel only to find there are difficulties raising a young family in her new country. Kissing an Old Dream Goodbye: A Memoir, 1950 -59 (Fictive Press 2019) is her memoir of the travails of a young family trying to integrate into Israeli society in the 1950s and gradually coming to the realization that her path to Israeli identity is complex and multi-layered. Levi later moved to Canada where she worked as a gerontologist for more than 30 years in positions such as recreation therapist, social worker, trainer/consultant in aging, and finally as a community volunteer coordinator. Her series of six booklets, Challenges of Later Life (1992) was widely distributed throughout Canada. Her book, Dealing With Memory Changes As You Grow Older (Bantam, 1998), co-authored with Kathleen Gose, has been translated into six languages. Gloria published her first memoir, My Dance with Shechina, in 2012. A dedicated student of Judaic studies, she also translated the story of a Chasidic master, The Life and Times of Simcha Bunim of P'shischa (2007), from the original Hebrew. Politically active, Levi served as a city councillor in Coquitlam from 1981 to 1984. She also established Habitat for Humanity of Greater Vancouver and helped build 27 houses, from 1997 to 2004. She is the mother of five, grandmother of 11, and great grandmother of seven.

Translation:
The Life and Times of Simcha Bunim of P'shischa (2007)