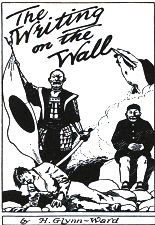 
"As a work of literature The Writing on the Wall is penny dreadful." -- Patricia E. Roy

The racist fears expressed in Hilda Glynn-Ward's novel The Writing on the Wall reflect the Anglophilic dread felt by many members of B.C.'s white supremicist ruling class for the so-called 'yellow peril' in the 1920s. The story begins in 1910 and proceed to predict the decline and decimation of Anglophile B.C. society due to Asian immigration.

Born in Wales in 1887, Hilda G. Howard was a daughter of a classical scholar. She travelled extensively, came to Canada in 1910 and turned to freelance writing in 1920. Primarily living in Victoria, but also in Kamloops and California, she wrote under the pseudonym Hilda Glynn-Ward. She is responsible for one of the most offensive racist novels published in B.C., The Writing on the Wall (1921), published by the Sun Publishing Company. This tract concludes with Vancouver's white population dying from typhoid fever contracted from Chinese-grown vegetables and sugar to which the local Chinese merchants had purposely added typhoid germs. In this story the Chinese and Japanese remain healthy and triumph because they have been "inured to it by countless generations of living without sanitation." In the year prior to the appearance of The Writing on the Wall, American author Lothrop Stoddard had published The Rising Tide of Color Against White World-Supremacy which referred to 'the Oriental question' in British Columbia. Patricia Roy's introduction places Howard's novel in a social context but doesn't provide much in the way of biographical detail. Apparently Howard was first recorded in print for her comments to the provincial retail grocers' convention in 1921 when she offered her views on immigration. [See also Tom MacInnes]

In 1921 Japanese and Chinese immigrants comprised one per cent of the Canadian population but seven per cent of B.C.'s population. Howard also published a travel book called The Glamour of British Columbia (1916; Toronto: Doubleday, Doran & Gundy, 1932) in which she refers to 'the little Jap who, laughing up and down his sleeve, goes cheerfully about his business in a gas-boat up the coast, or picks out the best small-fruit land in the country; the ubiquitous Chinaman, steadingly cornering all the loose cash in the land -- of a surety these two know more of British Columbia than most white men!" Oddly, she wrote letters to the editor that were sympathetic to the plight of Indians in the 1940s. In that decade she was only one of many British Columbians who favoured repatriation of all 30,000 Japanese Canadians within the province after Pearl Harbor. In 1958 she was deemed sufficiently respectable to have a romantic poem about Indians entitled 'Along the Road to Hazelton' included within R.E. Watters' British Columbia: A Centennial Anthology (M&S, 1958) under the name H. Glynn-Ward. She nonetheless retained her anti-Oriental views on the impossibility of assimilation, illegal immigration and the dangers of intermarriage until her death in Victoria in 1966. [Illustration was used on the original edition from the Sun Publishing Company.]

Review of the author's work by BC Studies:
The Writing on the Wall

The Writing on the Wall - In Three Parts Past, Present and Future (Vancouver: Sun Publishing, 1921; republished University of Toronto Press, 1974, with an introduction by historian Patricia E. Roy, for a Social History of Canada series edited by Michael Bliss)