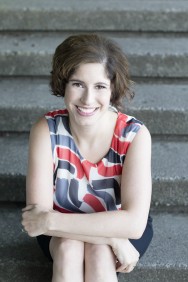 
As Education Director at the Vancouver Holocaust Education Centre, Adara Goldberg published her first book, Holocaust Survivors in Canada: Exclusion, Inclusion, Transformation, 1947-1955 (University of Manitoba Press 2015) to trace the influx of 35,000 Jewish survivors of Nazi persecution and their dependants who came to Canada in the decade following World War II. In the book Goldberg examines how Canadian resettlement officials and established Jewish communities both coped with major difficulties in order to incorporate the post-genocide migrants. Her research was conducted at Holocaust survivors' kitchen tables as well as in traditional archives.

Adara Goldberg received her Ph.D from the Strassler Center for Holocaust and Genocide Studies, Clark University. For Holocaust Survivors in Canadal she won the Marsid Foundation Prize for Holocaust literature at the first Western Canada Jewish Book Awards held in Vancouver she was 2016-17 Azrieli International Post-Doctoral Fellow in Israel.