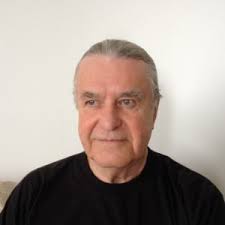 
A long time member of the English Department at Simon Fraser University, Alban Goulden published stories, essays, and poems in Iron, Grain, and subTerrain. His first book of short stories was In the Wilderness and his first novel was HOME 1: Departure. A second collection of short stories As If (Anvil Press 2016) passes the boundaries of conventional wisdom into the realms of fantasy and magic realism.

Articles: 1 Article for this author
As If
Review 2016

Alban Goulden writes with a fire and vitality that belies his age. In his second collection of short stories, As If (Anvil $18), the Langara English prof addresses the fluid and subjective nature of life.

Goulden has previously published Sci-Fi so don't expect kitchen sink realism. Every story leaps into madness and wonder immediately. 'I'm Not Buying Your Lies Anymore' starts with the sky tearing open to rain blood. The characters treat this as ordinary.

"The All-Meat Empress Cafe" introduces shimmering force fields by the end of the second page. "Looks Like I Got A Vulture"; starts with an earthquake, riots and spattered blood. "Vampyr (sic) at the Movies" literally describes the cinematic experience of a vampire going to the movies.

Set in New Westminster, the titular story "As If,"; complicates the realms of death when one of the narrators, Rye, slips on a raft of logs and disappears beneath the water. Maureen, the mother of his child, becomes an alternate narrator. This pair meets again as strangers in a cabin at the edge of the world. So has Rye really drowned or not? Is this same Maureen that he left behind?

Deception is a major theme among the stories in Goulden's collection.

It's giving too much away, but it's hard not to mention this story ends when Psych students at 'Language College' are lined up on a rooftop. Their final assignment is to jump in order to accumulate practical experience.

From the little lies in 'Joy' to sudden loss in 'As If,' to Mr. Jimmy in 'The Painted Hand,' throughout the book Goulden looks at all the ways one's world can collapse. Each story works to steal the floor from its protagonist, with little or no warning, giving the overall impression that there's no such thing as sure footing in this world.