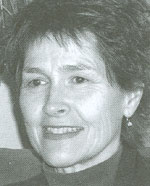 BIOGRAPHICAL DETAILS: Susan Andrews Grace, poet and visual artist, has lived in Nelson, BC Canada since 2001, moving there from Las Vegas, NV. Until 1997 she lived in Saskatoon and worked for CARFAC SASK (Canadian Artists Representation/Le Front des artistes canadiennes). She grew up in SK, Manitoba and BC. Her highschool years were spent in Burnaby and New Westminster. She holds a BA in Philosophy and an MFA in Creative Writing. In 2006 she was on the faculty of the Oxygen Arts Centre, aka Nelson Fine Art Centre.

"To fully fathom what drives human beings to commit the most noble or ignoble acts," writes Ernest Hekkanen in the New Orphic Review, "one has only to understand the dynamics inherent in 'tribes'. For a good treatise on tribal behaviour, I recommend Steven Pinker's The Blank Slate: The Modern Denial of Human Nature, which examines human behaviour in terms of a person's ability to pass on genetic information; and for a poetic evocation, check out Susan Andrews Grace's Love & Tribal Baseball.... Love & Tribal Baseball left me with a sad but poignant feeling, the same way I feel upon turning away from a Van Gogh painting."

According to promotional materials for Philosopher on the Skin Edge of Being, "Andrews Grace's writing reflects feminine consciousness and mucks around in the beautiful dark."