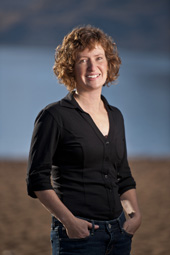 
Shelter (Random House, $29.95), by Frances Greenslade, is coming of age novel, set in Williams Lake and the Chilcotin, about two sisters in search of their mother. Greenslade teaches English at Okanagan College in Penticton. Her first book, a travel memoir, A Pilgrim In Ireland: A Quest for Home, won the Saskatchewan Book Award for Non-Fiction. It was followed by a second memoir, By the Secret Ladder: A Mother's Initiation (2007), about her childbirthing experience. She received an MFA in Creative Writing from UBC in 1992.

Greenslade was born in St. Catharines, Ontario, has since lived in Winnipeg, Regina, Vancouver and Chilliwack. She has a BA in English from the University of Winnipeg and an MFA in Creative Writing from University of British Columbia. Greenslade lives with her husband and son and teaches at Okanagan College.


Set in Williams Lake and the Chilcotin, Frances Greenslade's debut novel, Shelter is mostly about two sisters in search of their mother.

The tale spans four years in the 1960s and early 1970s, in Duchess Creek, a fictional small community a little beyond Williams Lake in the rolling Chilcotin hills, a land of harsh winters, hot summers, forests, grasslands and mountains, and tough, independent people.

The Dillon family lives in a shabby, unfinished little cabin with no indoor plumbing, scant electricity, no refrigeration, and scanter still, insulation. The mother, Irene, cooks on a wood stove.

Patrick works with a partner at a small sawmill, and the family squeaks by. Mealtime is redolent with the smells of fried bologna, venison, tomatoes and boiled turnip.

Still, it's a shelter, and the Dillons seem happy enough. Maggie and her older sister, Jenny, are close. Irene seems like the perfect mother: adventurous, frightened of nothing, independent and caring. Patrick, a moody but gentle drunk who likes to disappear, shares special experiences and confidences with his favourite, Maggie, and shows his love for his wife by jerry-rigging her a bathtub on the fringe of the forest.

The girls go off to school daily on the school bus. Part-time jobs don't seem difficult for them to come by. The sunny Jenny is popular, and the introspective Maggie is mature beyond her years, content but suspicious that things are about to get worse. And so they do.

At age ten, Maggie Dillon sits uneasily on the fringes of life, waiting for her perch to topple. She also suspects that trouble really does come in threes. She has an innate ability to foresee the future and, in her case, it seems more of a liability than an asset. Her sense of foreboding precedes the death of her beloved father in a logging accident.

Shortly before his death, he teaches her the importance of shelter. Together they construct a lean-to from a tree, eventually taking refuge in it during a subsequent downpour. If she ever gets lost, he tells her, it's shelter that must come first, before food, water or fire. Subsequently and ironically, she is soon without it.

Shelters take many forms in the novel: a car, a tent, a shack, a tree house, a trailer, a snow cave, even just a hole in the ground; all are capable of providing comfort and security.

After her husband's death, Irene seems unable-or just unwilling-to continue renting their little home. She abandons Duchess Creek for a summer job, followed by camping in the wild Bella Coola valley, taking her girls with her. Something happens during this camping trip that has repercussions and leads to more trouble. Trouble #2.

Eventually the girls are dropped off at a dreary home in Williams Lake, to board with the unhappy Bea and her wheelchair-bound husband, Ted, a family acquaintance. Jenny and Maggie wait for their mother to get settled and send for them, but it never happens.

How could a devoted mother leave her children behind? Where has she disappeared to?

All of Irene's correspondence with Jenny and Maggie has stopped, along with the cheques she was sending for the girls' board. Now Jenny is 15 and Maggie 13, with no mother in sight, and Trouble #3 is about to manifest itself.

Maggie has already lost her father and mother, so what more could possibly happen? Like their surroundings, the characters are roughly hewn, largely unknowable. Although their actions are often predictable, you never get to know the whys, hows or whens. It's a plot-driven novel in which the supernatural seems oddly commonplace.

The book falls into three sections: food, water, and fire, but while food, water, and fire, abide, the greatest of all is shelter. Although some may find the plot overly predictable, and the situations a tad stereotypical, Shelter promises to be a hit with many, with rights having been already sold in the U.S., Germany, Holland and the U.K.

Originally started in 1992 when Frances Greenslade was completing her MFA degree at UBC, Shelter was completed while caretaking a large, remote property near Chilliwack with her new husband. The manuscript sat on the back shelf while life intervened. After the couple moved to Saskatchewan and she had her son, Greenslade re-wrote Shelter over a two-year period.

Greenslade's husband is partially responsible for the moody, beautiful, yet temperamental setting. When Greenslade met him, he beguiled her with tales of growing up in the Chilcotin, instilling in her a need to see this unknown land. While exploring there in their VW van, Greenslade began to imagine the sisters in the novel, Jenny and Maggie.

Shelter was preceded by a travel memoir, A Pilgrim In Ireland: A Quest for Home, winner of the Saskatchewan Book Award for Non-Fiction, and a birthing memoir, By the Secret Ladder: A Mother's Initiation. 978-0-307-36031-1