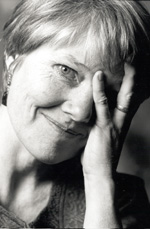 
Born on September 21, 1944 in Boston, Massachusetts, Nan Gregory moved to B.C. in 1945. A professional storyteller, she has received numerous awards including the Sheila Egoff Award in 1992 for How Smudge Came (Red Deer Press, 1996), the Mr. Christie's Prize in 1996 and the CLA Book of the Year Award in 2002 for Wildgirl and Gran (Red Deer Press, 2000). Nan Gregory's I'll Sing You One-O is a novel about a 12-year-old removed from her loving foster parents to live with relatives she doesn't know.