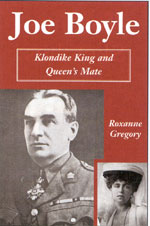 
Gregory's biography of a 'gentleman spy', Joe Boyle: Klondike King and Queen's Mate (Dundurn 2003), recalls the World War I heroics of Canadian Joe Boyle who saved thousands of lives in World War One, rescued hostages and gained the favour of Romania's Queen. He also befriended Leon Trotsky and Alex Kerensky. His bones were repatriated and laid to rest in Woodstock, Ontario some 50 years after his death. Roxanne Gregory's novel is Boudicca's Revenge. Her screenplay The Wasteland was a finalist for the 2002 Writers Guild of Canada Charles Israel Prize when she was living in Madeira Park, B.C.