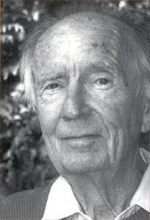 
Eldon Grier has not been widely recognized for his lyrical cosmopolitanism and his affinity for avant-garde painters, but for some he was a major figure in Canadian literature. The son of a Canadian army captain during World War One, painter/poet Eldon Grier was born in London, England in 1917 but raised in Montreal. He considered himself a fourth generation Canadian, having been born in England only because his Canadian father was at war. After working as a commercial artist, he went to study painting with Diego Rivera in 1945. He returned to Montreal and taught at the Montreal Museum of Fine Arts with Arthur Lismer. After a bout of tuberculosis for two-and-a-half years, he married his second wife, Sylvia Tait, a painter, and began writing poetry more seriously in his mid-30s, rubbing shoulders with Louis Dudek and Irving Layton, living extensively in Europe and Mexico, and often writing about painters. He published his first book in 1955 in Majorca, Spain. He moved to West Vancouver in 1968 and was made a Life Member of the League of Canadian Poets in 1977. He published at least eight books before Ekstasis Editions released Eldon Grier: Collected Poems in 2000. "Eldon Grier's Collected Poems," said reviewer Gary Geddes, "is a welcome addition to any library." He died in Vancouver in late July, 2001 at age 84.