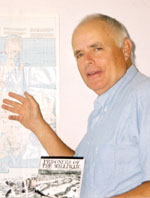 A former U.S. city councillor and social worker, he first published an autobiographical novel, Beyond the Vows, about a priest named JP Lacey who is deeply troubled by social injustice. It was followed by a novel about the fate of three hundred convicts released onto Adak Island in the Aleutians, Prisoners of the Williwaw (Trafford, 2000), reflecting Griffin's abiding concern for prison reform. It was written after Griffin had been visiting the Matsqui Prison to encourage inmates to become better writers. He had undertaken similar work at Waupun prison, a maximum security prison in Wisconsin.

Griffin proceeded to self-publish five more books, including an autobiographical work, Once a Priest, in which he recalled marching as a young, Cleveland-based Catholic priest from Selma, Alabama to Montgomery with Martin Luther King.

Griffin left the priesthood in 1968 to obtain a Masters degree in social work at the University of Wisconsin-Milwaukee. Elected to Milwaukee's city council in 1972, he and his family came to B.C. in 1988. Having been officially named a Civic Treasure by Surrey in 2012, Ed Griffin died at age 78 on July 23, 2015 from complications arising from a stroke.