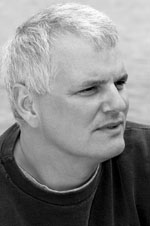 
A humour-tinged amateur sociologist and screenwriter, Chris Gudgeon of Victoria has been the co-owner of Something Fishy Salmon Gifts in Victoria; worked for Mattel Interactive, Disney's Creative Wonders, and developed websites for television shows; been the producer and writer for the television series Ghost Trackers; and, until 2012, worked for the B.C. government as an arts & culture facilitator with an emphasis on writing and publishing within the B.C. Arts Council. But in his early life, Gudgeon worked in a variety of jobs across Canada and the United States including psychiatric orderly, rent boy, bartender, rock musician, rodeo clown, TV weatherman, and youth outreach worker.

With his wife Barbara Stewart, he co-wrote The Luck of the Draw: True Life Tales of Lotteries and Their Winners, and he has contributed to magazines that include Playboy, National Lampoon, Geist, Mad and Canadian Wildlife. His biographical subjects are two outsiders, folksinger Stan Rogers and poet Milton Acorn, both Canadian icons beyond the mainstream.

Gudgeon's first fiction collection of eleven stories, Greetings from the Vodka Sea, is mainly about characters grappling with sex and each other, a follow-up to a non-fiction title about sex. The stories include a chess-playing doctor who loses his wife to a psychologist and an adulterer who considers seducing a middle-aged woman he finds repulsive.

Chris Gudgeon's first novel Song of Kosovo is a sly, frequently amusing and penetrating distillation of estrangement and social chaos set during the Balkan wars of the late 1990s. Ostensibly a manuscript discovered by Gudgeon while working as a post-war "social historian" in Pristina, Kosova, for an international team of translators and rebuilders, the novel takes the form of a young man's memoir, written mostly in prison for his defence lawyer, recalling the shattering of former Yugoslavia. The narrator, one Zavida Zankovic, must retain his sanity in the face of absurd charges, resulting in a darkly comic style reminiscent of Kafka, Stephen Vizinczey, Josef Skovecky and/or Jerzy Kosinsky. This is not an attempt to reproduce the tragedy of war with documentary zeal; rather it is a literary journey emboldened by wit and artifice, a perfectly executed literary conceit. The intended recipient of the story is one Nexhmije Gjinushi of the Pristina School of Law and Cosmeticalogical Sciences. Throughout the horrors of the war, there is his urgent and abiding love affair with the beautiful Tristina. He meets her at the Pavlov Museum outside of Moscow where, as students, they spontaneously decide they must steal two stuffed versions of Pavlov's dogs. The maturity of Gudgeon's stylistically European novel will come as a surprise for anyone who might have under-estimated him as a literary arts administrator for the B.C. Arts Council.

In 2016, Gudgeon published his first book of poetry, Asleep in Wonder (Anvil Press 2016). The poems explore identity and themes like addiction, sexuality, loss, love and wonder. Openly bisexual, Gudgeon has been in an open relationship with author/self-help guru Jasper Vander Voorde since 2009.