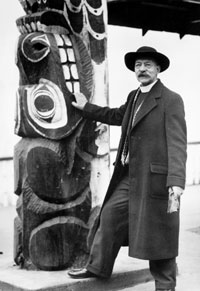 
Described by Chief James Sewid as "an enthusiastic believer in our traditional aspirations", medical doctor Sisvan William Gunn wrote and donated the text for Kwakiutl House and Totem Poles (1966) with all proceeds to the Kwakiutl Nation. Asked to undertake the project by Chiefs Sewid and Henry Speck Ozistalis in order to describe the new 50' by 70' Kwakiutl Big House built at Alert Bay, Gunn received the Kwakiutl name Kwe-Kwala-Gila two years later. Named after H.M. Ship Alert, the town of Alert Bay is situated on Cormorant Island, off the north-eastern coast of Vancouver Island. Gunn's first pamphlet on The Totem Poles in Stanley Park (1965) was reprinted at least four times and he produced a similar work entitled Haida Totems in Wood and Argillite (1967).