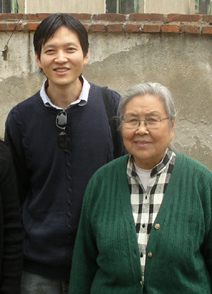 
Born in Shangong Province, China, Louis Luping Han grew up during the Cultural Revolution, during which his father was persecuted. For seven years he assisted his mother--a doctor born in 1926 who worked through WWII with the Communist Army, the Chinese Civil war, and the Korean War--to write and publish a memoir of these experiences. This became The Doctor Who Was Followed by Ghosts, an account of wartime medicine which touches on many highly controversial topics, including footbinding, infanticide and forced abortion, the Great Famine, and U.S. biological warfare in Korea during the war.

Dr. Qunying still lives in China, but her son Louis Luping Han now lives in Vancouver with his wife, Patty.

Articles: 2 Articles for this author
Her first surgery
Except


The clinic was set up in a villager's home, which had two long dressers that could be used as temporary sickbeds for patients. Bandages and medicines were in short supply, so we had to boil the used bandages and guaze in order to reuse them. Iodine, alcohol and anaesthetic were considered to be extremely precious, used only when absolutely necessary.

A few days after the clinic was set up, an unconscious soldier was carried into the clinic on a stretcher. He had been badly injured in a battle. For the first time, I assisted a surgeon during an operation. We had no other alternative but to cut off both his arms and legs. I tried to ignore the chilling sound of bones being cut through with a small copper saw. When the patient regained consciousness, and found he had lost all his limbs and had only his torso remaining, he became hysterical, refusing to eat or accept treatment.

"Get the hell out of here,"; he yelled when I approached him.

When I attempted to feed him, he tried to bite me. He missed, lost his balance and couldn't turn over by himself. He struggled and swore with the most obscene words he could come up with in his Shanxi dialect.

A month later, the patient was sent back to his hometown. An official accompanied him home. "What happened to him?"; I asked the official when he came back a week later.

"His mother refused to accept her own son. She that it wasn't her son because he hadn't looked like that when he had left home. 'What have you done to my son?' she said. I didn't know how to calm her down. I told her that revolution came with a cost. On the other hand, the wife vowed to take care of him for the rest of his life.";

"We gave the family two hundred pounds of millet as a settlement.";

The Doctor who was Followed by Ghosts
Article


Born in Inner Mongolia in 1926, Dr. Li Qunying offers a rare first-hand account of medical, military and Maoist atrocities, as well as U.S. biological warfare, in The Doctor who was Followed by Ghosts: The Family Saga of a Chinese Woman Doctor (ECW $28.95).

As a young medic, she marched through Korea from the north with Chinese soldiers who suffered terribly from frostbite during the Korean War.
"Some got it so bad that their feet and shoes froze together into one painful mass. Overnight, there were soldiers frozen to death. They had to bury them in the shallow snow because the ground was frozen so solid that it was impossible to dig holes in it.";

As a surgeon's assistant she had to provide counselling to soldiers before, during and after their agonizing amputations, when limbs were removed with a copper saw. Only high-ranking officials received anaesthetic. At nightfall she disposed of the countless arms and legs by burying them in a hole behind the operating rooms.

Qunying suggests the United States dropped more napalm in Korea than they did in Vietnam. During one such bombing, when her husband-to-be Han Wende caught on fire, she was able to extinguish the flames.

"The soldiers lived life like a bunch of rats. They stayed in their holes during the daytime and came out at night.";

But she stops short of validating Chinese claims that the Americans used germ warfare. More likely that was a bogus accusation to cover up the horrendously unsanitary conditions that brought death to thousands of Chinese troops in support of the North Korean regime.

Just as chillingly, Comrade Li reveals the extent to which ordinary citizens in China have been largely governed by fear of arbitrary Communist Party persecution during various regimes. In particular, she focuses on the terrible strains that she and her husband faced, beginning with a bogus accusation that he embezzled two thousand yuan during the Korean War, followed by trumped-up accusations that he was an historical counter-revolutionary.

Through a matchmaker she had met her handsome and "harmless"; husband Wende when he was employed as an accountant. "I couldn't find much wrong with him except that he was a noisy eater, which I assumed was a bad habit that that he would break after we got married. But he never did."; They were married in 1954.

The Doctor Who Was Followed By Ghosts is as much a family saga and a love story as it's a political exposé. To escape unwarranted (and ridiculous) political persecution under Chairman Mao during the Cultural Revolution in 1970, she and her husband escaped to the countryside where she aided peasants as a barefoot doctor.

Before and after his death, her efforts to clear her husband's name are heart-rending. In 1995, he finally received a respectful burial, in accordance with her pleas, eleven years after his death.

Comrade Li also describes the Great Famine, forced abortions, infanticide, disease epidemics, foot-binding and opium production by the Communist army. Having joined the army in 1945 and gained membership to the Communist Party in 1953, she repeatedly reveals the cruel and catastrophic policies of Mao from the perspective of a hard-working humanitarian who steadfastly provided medical treatment in a society that was sick to its political core.

Although literary flair is absent, The Doctor Who Was Followed By Ghosts merits comparison with the work of Aleksandr Solzhenitsyn. That is, after reading it, one can never forget that Mao was a monster on par with Joseph Stalin and Adolf Hitler.

Dr. Li Qunying officially retired from medicine in 1986. She has twice visited Canada, once staying in Vancouver for five months. She now lives in Jinan, Shandong Province. Her youngest son and co-author, Louis Luping Han, came to Canada in 1991. He lives in Vancouver with his wife, Patty.
978-1550227819