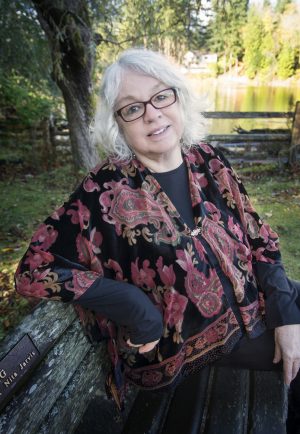 
Formerly the editor of the Bowen Island Undercurrent for seventeen years, as well as the author of a history of Bowen Island, Edythe Anstey Hanen has written a debut novel, Nine Birds Singing (New Arcadia 2018), with praise from Jack Hodgins, Nick Bantock, Bernice Lever and Patrick Taylor who dubbed it, "a veritable Aladdin's Cave of delights." From Vancouver in the 1960s to present-day Mexico, Nine Birds Singing is an odyssey of self-discovery, in synch with the #MeToo movement, in which the heroine Maddie searches for independence from her parents' restrictive values.

Hanen has published articles, short stories and poetry in literary magazines as well as in the Globe & Mail, the National Post and the Hamilton Bay Observer. She is a regular contributor to Mexconnect, an online magazine for travellers to Mexico She's had stories in the Canadian Authors Association anthology National Voices in 2012, 2014 and 2016, and the BC Federation of Writers magazine WordWorks. Her story "When We Last Met"; was published in Room Magazine, December 2017. $20 978-0-9810241-5-8

Bowen Island Reflections (Bowen Island Historians, 2004). A Bowen Island history covering the period of 1874 to 1958 (the date of the arrival of the first car ferry).