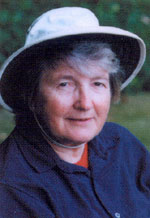 
Born in 1939 and an avid kayaker since 1969, Harbord embarked on a world voyage from England in 1963. She explored BC, Saskatchewan and Nova Scotia before settling in B.C. in 1977. She was first president of the Sea Kayak Association of B.C. and received an honorary membership in 2003. She has paddled extensively on the West Coast and produced an historical guide to Nootka Sound, as well as a social history of Desolation Sound.

Harbord's well-researched Desolation Sound: A History (Harbour $24.95), a project that emerged from her earlier profiles of Sliammon chief Joe Mitchell and Sliammon elders Elsie Paul and Sue Pielle: "Soon I realized that Powell River, where I live, was full of people who had spent their childhoods on one of the many homesteads dotted around the Sound."; Located 150 kilometres from Vancouver, Desolation Sound was named by George Vancouver. Harbord's character-driven history provides a map of 34 homesteads in the area that has become one of the most popular cruising destinations on the West Coast.

Desolation Sound was followed by an equally impressive history of Texada Island, the largest island in the Strait of Georgia. [See below]

Review of the author's work by BC Studies:
Texada Tapestry: A History

Texada is the largest island in the Strait of Georgia, a long strip of richly mineralized granite and limestone dividing the upper gulf. Travel time from Vancouver is six hours via three ferries. A newcomer's first impression is of an idyllic place with a big sandy beach, a Sunday farmer's market and a scant population of aging loggers, miners, pot-growers and other retirees, but this belies Texada's intriguing history.

Although today Texada is better known as the home of the illegal agricultural product called Texada Gold, it was once the focus of a real gold rush that lured no less a figure than cookie tycoon William Christie. Later, Texada was the site of British Columbia's first major political scandal when squabbles over a rich iron ore claim forced the resignation of Premier Amor de Cosmos in February 1874. The rich mineral deposits in time gave rise to three booming towns-Gillies Bay, Blubber Bay and Van Anda, noted as the town with everything: not just a whorehouse, but an opera house. Population ebbed and flowed with mineral prices and Texada went in and out of the news. Its association with illegal intoxicants dates back to 1928 when the biggest whisky still north of Vancouver was busted in romantic Pocahontas Bay. The bitter Blubber Bay strike of 1938 put Texada in the news again as the Pacific Lime Company faced off against the International Woodworkers' Association labour union in a bloody riot. This is also the feisty island that repelled the might of the Greater Vancouver Regional District when it wanted to dump metropolitan garbage in the abandoned pit of the once-famous Texada Mine.


Heather Harbord's book Texada Tapestry: A History (Harbour Publishing, $32.95) has received an Honourable Mention in the BC Historical Federation's Competition for Historical Writing for 2011. The annual awards recognize books that feature outstanding stories and writings about British Columbia's history.

Texada Tapestry provides an in-depth look at the people and places that have contributed to the fascinating history of the largest island in the Strait of Georgia. Best known for its long strip of coveted mineralized granite and limestone dividing the upper gulf, Texada Island is now better known as the home of the illegal agriculture product called Texada Gold. Texada was once the focus of a real gold rush that lured cookie-tycoon William Christie and was the site of British Columbia's first major political scandal when squabbles over a lucrative iron ore claim forced the resignation of Premier Amor de Cosmos in February 1874. The rich mineral deposits in time gave rise to three booming towns-Gillies Bay, Blubber Bay and Van Anda. Over the years the population flowed with the mineral prices as Texada was in and out of the news.

Author Heather Harbord's dedicated research includes over a hundred interviews with locals and old-timers, creating a captivating book full of unforgettable characters, humorous anecdotes and many previously unpublished photographs. A follow-up to Heather's BC bestseller Desolation Sound: A History (Harbour Publishing, 2007), Texada Tapestry is another valuable volume on the history of the BC coast.

Heather Harbord is a former Geology Librarian of the Royal School of Mines in London who has been exploring Canada's three oceans by sea kayak, Russian icebreaker and working boats since 1963. She has written four previous books including the bestselling Desolation Sound: A History. She lives in Powell River, BC, overlooking the island she has written about and kayaked around.